Why England should be worried in spite of mauling Scotland

Having been thrashed mercilessly by Australia and New Zealand in their first two World Cup encounters, England would have been desperate for a win. They were lucky that they came across the Scots at Christchurch on Monday. A win was a mere formality since Scotland are among the weakest sides in the tournament. But, England still needed to go out there and dominate, if for nothing else, just to reassert to themselves that they belong to the stronger half of the cricketing world and not the weaker ones, which include the likes of Scotland. They won by a massive margin in the end, but the triumph wasn’t flawless by any stretch.

It goes without saying that Moeen Ali’s hundred in the game was the biggest positive for England. Before this match, there were question marks over his place in the team, specifically because he wasn’t delivering with the bat at the top of the order. Against Scotland though he displayed supreme touch, and looked in no trouble whatsoever during his stay at the crease. It was the kind of effort that should give him immense confidence going into the future games. The fact that he starred with the ball as well will make him feel better. It remains to be seen though how he fares against stronger sides. 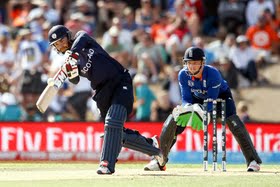 The other opener, Ian Bell’s, return to form also signaled good news for England. Bell and Ali featured in a massive partnership that lasted over 30 overs, and added 172. While Ali was the dominant partner, Bell was happy getting some time out in the middle. It was disappointing though that he felt immediately after crossing his 50. Having consumed 85 balls for his 54, Bell should have ideally carried on and completed a century, at least against a weak opponent like Scotland. He did not, and England faced some trouble following his exit.

England’s batting was far from convincing once Bell departed. Gary Ballanceregistered yet another failure atnumber three, and Joe Root also failed for a change. Luckily for them, skipper Eoin Morgan found some form, and guided them past 300. It was still a below par effort. They were better with the ball. Steven Finn’s returns of 3 for 26 were much needed for some confidence boost in the wake of the battering he took against Brendon McCullum. James Anderson and Chris Woakes also impressed with a couple of wickets each.

Scotland could not repeat the kind of performance they came up with against New Zealand, and would be disappointed over the same. Still, if they want to look back at some pleasant memories of the game, Josh Davey finished the match with four wickets. With the bat, opener Kyle Coetzer was highly attractive with his 71. Scotland would look to build on their gains. As for England, they can only hope that their World Cup 2015 journey gets better from here onwards.