Sunrisers Hyderabad will face Royal Challengers Bangalore in match 27 of the Indian Premier League at Hyderabad in the second match of the day on Saturday. Sunrisers’ winning momentum came to a halt as they were undone by an inspired Rising Pune Supergiants in their previous match. The last contest between the teams saw Bangalore get the better of Hyderabad. But, Virat Kohli’s men haven’t quite tasted the desired success since. While Sunrisers have three wins and as many losses from six matches, Bangalore have won two and lost three out of five.

Sunrisers’ main aim against Bangalore would be to get their batting in order. Against Pune, they just weren’t in the groove. How heavily the team depends on their skipper David Warner was evident in the last match as Ashok Dinda sent back the left-hander for a duck. Shikhar Dhawan managed to get an unbeaten fifty, but it was more of a face-saving effort. Aditya Tare, Eoin Morgan, Deepak Hooda and Moises Henriques all fell for single-figure scores. Except for Morgan, the rest haven’t been among the runs. So, Sunrisers’ batting definitely remains a worry. 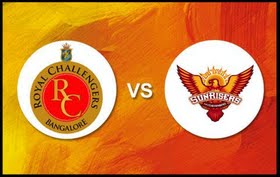 The bowling outfit of Sunrisers is a decent one. There really wasn’t much they could do against Pune since their batsmen did not give them enough runs to play with. Bhuvneshwar Kumar and Mustafizur Rahman, both have played match-winning roles for the team with the ball. Ashish Nehra was rusty on comeback in the previous match, so he will be keen to make an impact. The trio will look to Henriques and Bipul Sharma for support. Both will have to raise their game for sure.

For Bangalore, it has been their bowling that has let them down in a big way even as their batting has been in supreme form even in the absence of Chris Gayle, who is said to be available for the clash against Sunrisers. Against Gujarat Lions, Bangalore notched up 180 courtesy a maiden T20 century from skipper Kohli. But, the team went down as their bowlers were taken to the cleaners. Yuzvendra Chahal has just not been able to repeat his heroics of the previous seasons, which has been a massive setback for Bangalore. Kane Richardson and Iqbal Abdulla went for plenty of runs in the previous match, and they hadn’t done any better earlier as well.

If Bangalore can get their bowling in order, they automatically become a dangerous team for their batting has been in stupendous form. Kohli has led from the front with blazing knocks. He and AB de Villiers, as a duo, have been completely unstoppable in this series. Then, there is Shane Watson who has come up with impressive cameos along with Sarfaraz Khan. In the absence of Gayle, Lokesh Rahul has also done a decent job. If Gayle also comes to the party against Sunrisers, and the bowlers chip in, there is no reason why Bangalore cannot give Hyderabad a tough time.