Despite having slept for just four hours in the past two days, Ishant Sharma came out and bowled a brilliant spell to give India an outside chance of making a comeback in the Wellington Test against New Zealand. Ishant dismissed Tom Latham (11), Tom Blundell (30) and Ross Taylor (44). However, a captain’s knock of 89 from Kane Williamson kept the Kiwis ahead in the game as they finished day two on 216 for 5.

Earlier, India resumed their innings on 122 for 5, but crumbled to 165 all out as Tim Southee and Kyle Jamieson picked up four wickets each. Ajinkya Rahane top-scored for India with 46, but he was involved in a dreaded mix-up with Rishabh Pant (19), which cost the latter his wicket. Mohammed Shami’s 21 from 20 took India past 150.

Speaking after the day’s play, Ishant revealed that he travelled for 24 hours and reached New Zealand 72 hours prior to the start of the Wellington Test. "I am not happy because I have not slept for two days and I was struggling a lot today. The way I would have liked to bowl, it did not happen. They asked me to play and I played. Anything, for the team," the veteran of 96 Tests revealed. 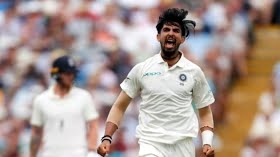 While Ishant did impress with three wickets, and somehow kept India in the hunt, he explained that he could have done better with more sleep, as it would have given him some much-needed rest. "Not that I wasn't happy with my bowling. I wasn't happy with my body as I could only sleep for 40 minutes last night and day before the Test match, I slept for three hours," added Ishant.

"The more you can recover, the better effort you can put in on the ground. There's no better recovery than sound sleep. The sounder your sleep is, the better your body will respond on ground," the 31-year-old further explained.

When Ishant tore his ligament during a Ranji Trophy game earlier last month, his participation in the New Zealand Tests was doubtful. However, he worked hard with the NCA, and the combined efforts paid off. "All credit goes to NCA support staff as they worked really hard with me. We never really thought I have to play a Test because my MRI shows I had a complete ligament tear, not one but two tears. People said 'he is out for six weeks',” the Indian speedster said

Ishant explained that once injured he just wanted to get fit the right way, and did not have any target in mind to make a comeback. "I didn't have any target that I have to play a Test. I thought 'okay, if it's possible to play, I will play but if it's not, there's hardly anything I could have done'. Because the way I got injured, I don't think it had happened with anyone. But if you are destined to get injured, you can slip in toilet too," he said in a humorous tone, which elicited a few laughters