In spite of the fact that Bangladesh had thrashed Pakistan 3-0 in ODIs before taking on India, the visitors still headed into the series against Bangladesh as favorites.

In spite of the fact that Bangladesh had thrashed Pakistan 3-0 in ODIs before taking on India, the visitors still headed into the series against Bangladesh as favorites. After all, this was a side that had defeated every opponent in the World Cup, including Bangladesh, until they came unstuck against familiar foes Australia in the semis. Also, India had never lost a series to Bangladesh, so history too was in their favour. However, two games have changed everything. Bangladesh put up a highly spirited effort, reminiscent of their growing clout in world cricket, to catch the Indians off-guard. 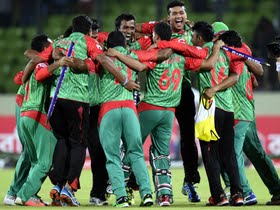 What must be most worrying for India is the fact that they never looked like winning either of the two matches, and it was as emphatic a win as Bangladesh could have hoped for. In fact, the hosts' skipper was candid enough to admit that Bangladesh did not expect to win the series so easily. And therein lies one of the biggest tragedies of Indian cricket. They had an opposition that had doubts whether they could beat India comprehensively, but the Indians did not to plant even a seed of doubt in Bangladesh's mind. At no stage during the two games did India come anywhere close to competing with Bangladesh. Winning was a distant dream.

The embarrassing loss to Bangladesh is just another reflection of India's misguided priorities. How many times have we now seen Team India fail disastrously immediately after taking part in an IPL season. In fact, it is now becoming a routine of sorts with the team. Perhaps, it was believed that India could break that jinx of sorts with a relatively easy tour of Bangladesh. But now, even that myth has been shattered. In the aftermath of the defeat, MS Dhoni stated that the team was tired after a long season. It would be pertinent to note that the long season featured two months of IPL.

Yes, India have had a long season, during which they spent close to four months in Australia, but imagine how much rest they could have got had there been no IPL. By mentioning the 'long season' excuse, the Indian skipper has indirectly hinted that even the IPL has taken a toll on them along with other international assignments. But then, none of the big guns bothered about fatigue when they turned out tirelessly for two months in the IPL. And now, we have the Indian skipper giving the tired excuse. Wonder what one should make of it.

Although Pakistan lost to Bangladesh 0-3, to be fair to them, they had an extremely weak side, possibly their weakest in decades. On the contrary, India went in with a full-strength squad, the same set of players who helped them reach the semi-finals of the World Cup. But, their performance was as poor as Pakistan put up in the preceding series. There was definitely a hint of overconfidence in the manner that India performed. There was a sense of arrogance as well, with Suresh Raina maintaining that India were the better side in spite of the loss in the first ODI. The bitter truth for India is that Bangladesh were the superior team in both the games, and by some distance.