IPL 2018, 26th T20 Preview: Delhi will be looking for a winning start to Iyer captaincy 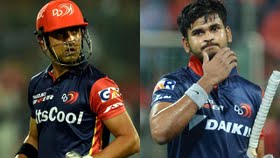 The 26th match of the Indian Premier League 2018 will see Shreyas Iyer taking over the mantle of leadership of Delhi Daredevils from Gautam Gambhir, with the latter having given up captainship. Iyer has a massive task on hand. Although Gambhir resigned voluntarily, the pressure on him was immense. Delhi have five losses in six matches. They will be facing a fresh Kolkata Knight Riders, who are returning from a five-day break.

Gambhir may have quit captaincy, and apparently, he won’t even take any salary. Still, it would be interesting to see if he now finds a place in the starting eleven. Gambhir just has a half-century to his name in the opening game. Glenn Maxwell has been massive disappointment, leaving Rishabh Pant and Shreyas Iyer with too much to do.

Gautam Gambhir has a strike rate of 70 against pace bowlers this season and it shoots up to 153.5 against spinners. He has also been dismissed on four occasions by the pacers this season

Should he play, this match is set to be Piyush Chawla’s 200th T20 game

Mitchell Johnson could get a look in for Russell, should he fail to be fit in time for the game.