Karun Nair towered above all on the fourth day of the fifth and final Test at Chennai on Monday, as he blasted an unbeaten 303.

Karun Nair towered above all on the fourth day of the fifth and final Test at Chennai on Monday, as he blasted an unbeaten 303. Here are some of the records Nair created during the course of his marathon innings.

By virtue of his unbeaten 303, Nair has now become only the third batsmen in Test history to convert his maiden hundred into a triple century. And he is in great company. The other two to do so before him are Gary Sobers, who blasted 365 against Pakistan in Kingston in 1958. Bob Simpson, on the other hand, hit 311 against England in Manchester in 1964. 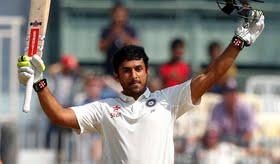 Nair’s 303 not out is now the highest score by an Indian number five in Tests. The previous best was by former India skipper Mahendra Singh Dhoni, who hit 224 against Australia, also at Chennai in 2013.

Nair is now the third batsman to smash a triple hundred while batting at No.5 position in Tests. Michael Clarke made 329 against India in Sydney in 2012. The other one to do so is Sir Don Bradman, who made 304 against England in Leeds in 1934.

India’s 759 for 7 declared on Monday is now their highest Test total. They had blasted 726/9 dec against Sri Lanka at the Brabourne stadium in 2009.

Nair is now at number three when it comes to highest individual score by a batsman at No.5. Michael Clarke’s 329 in Sydney against India in 2012 is the best ever.

Nair’s knock is now the second highest individual score at Chennai. Virender Sehwag's 319 against South Africa in 2008 is the best. Sunil Gavaskar is third on the list. He made 236 against West Indies in 1983.

This is the fourth time India have made 700-plus in Tests, and the second time they have done so at home. The previous highest Test score at home was 726/9 declared against Sri Lanka at the Brabourne stadium in 2009.

Also, Nair's 303 not out is the third highest individual score by an Indian in Tests. Sehwag is on top of the tree. He made 319 against South Africa and 309 versus Pakistan. He is only the second Indian to register a triple hundred.