ENG vs NZ 1st Test Day 1 report: With all the controversies surrounding Kevin Pietersen, and a new order in place at the ECB, with Andrew Strauss in charge, England went into the opening Test at Lord's

With all the controversies surrounding Kevin Pietersen, and a new order in place at the ECB, with Andrew Strauss in charge, England went into the opening Test at Lord's against New Zealand under a cloud of sorts. Their nervousness definitely showed early on as they crumbled to 30 for 4, after Brendon McCullum won the toss, and decided to let his bowlers make first use of the wicket. After the first hour, critics of English cricket would definitely have been pointing out over how they were missing a solid Pietersen in the middle order. However, aggressive 90s from the in-form Joe Root and, in-search-of-runs Ben Stokes, ensured such talks were relegated to the backburner for the day. 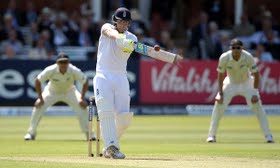 Root and Stokes joined forces when England where in desperate strife. And, under such situations, England normally look to put their heads down, and bat out time. But, Root is someone who possesses rare aggression for an English cricketer. Of course the form that he has been in, which resulted in him being named England's cricketer of the year recently, must have only aided his confidence. Root raced to his 50 off only 53 balls, and continued playing his strokes without much trouble even after that. Even as England's top and middle order has struggled across all formats, Root has been the one man, who has stood out with his consistency. On Thursday, he gave continued proof of his ability and kept England afloat. In the company of Stokes, Root added 161 runs in 32 overs to fashion a memorable comeback. Unlike Root, Stokes hadn't been among the runs and, in fact, he hadn't gotten off the mark in the last three innings in England. In the company of Root, however, Stokes flourished, and ended up getting to his half-century quicker than Root. He went on to outscore him, attacking Matt Henry and Trent Boult. In an anti-climax of sorts, Stokes fell to an away going delivery from Mark Craig. The slid down the slope and clipped the off-stump as Stokes fell for 92. Root also missed his hundred. Looking to get to three figures, Root tried to cut Henry, only to edge one behind the stumps.

The dismissal of Root gave New Zealand hope of a fight back, but Jos Buttler and Moeen Ali ensured that England remained in the ascendancy. They added 103 for the seventh wicket as England eased past 350. Buttler eventually fell to the last ball of the day, for 67, playing a rash shot, and being trapped in front by Boult. The end was similar to the way England began the day, though it was the middle that mattered the most. Debutant Adam Lyth fell to one from Tim Southee that drew him forward, and got the edge. Gary Ballance then drove Boult straight to third slip. Alastair Cook was back to his struggling ways, playing an awkward pull shot to a leg side delivery from Henry. Ian Bell's woes continued as he registered another single figure score, bowled by a beauty from Henry. In spite of finishing with 7 wickets, England held the upper hand at the end of day's play having reached 354. Moeen Ali began nervously, but was there in the end, unbeaten on 49. His responsibility on day two would be to shepherd the tail. It was a mixed day for New Zealand's bowlers. Most of them got among the wickets, and looked impressive early on. But, once the juice went out of the surface they were easily dealt with. Brendon McCullum will have to work out a strategy to keep England under 400.