At the start of the day’s play, nobody could have bet on the match finishing before stumps. But, that is exactly what happened as Stuart Broad produced a sensational display of fast bowling, similar to the ones we have seen of him in recent times

At the start of the day’s play, nobody could have bet on the match finishing before stumps. But, that is exactly what happened as Stuart Broad produced a sensational display of fast bowling, similar to the ones we have seen of him in recent times. Broad claim six wickets for 17 runs to shoot out a hapless South Africa for 83. England then went on to chase the required 74 to win without much trouble. They lost three quick wickets towards the end of the innings, but it did not matter much as the Englishmen were almost at the finish mark. They seven-wicket triumph gave them an unassailable 2-0 lead.

It was in the period after lunch that Broad completely turned the match England’s way. Until then, the game was well-balanced as the visitors had only secured a 10-run first-innings lead. He, in fact, claimed five wickets giving away only one run. South Africa had begun watchfully as openers Dean Elgar and Stiaan van Zyl put on 23 for the first wicket inside eight overs. The match was moving along at a normal pace till then. But, neither the South African team, not the openers out in the middle had any inkling of what was to hit them.

Broad began South Africa’s downfall by having Elgar caught behind with a ball that rose and moved away from the batsman. Van Zyl was dropped at slip by James Anderson, but it did not cost England at lot as Broad had hit caught at gully soon after. A lot depended on new South African captain AB de Villiers. But, even he could not withstand the Broad magic, falling for a duck off one that came back in and took the edge. Hashim Amla was the next to go, caught smartly at short leg by James Taylor while Temba Bavuma was bowled as he ducked under a short ball, and got himself into a tangle. 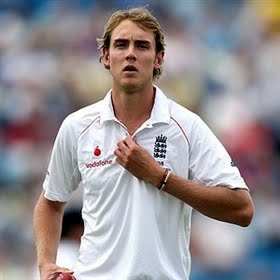 While Broad did most of the damage, the others chipped in as well, with supporting acts. Taylor was in the action again as he caught Dane Vilas at short leg off Steven Finn’s bowling. Chris Morris failed to keep out a full delivery from Ben Stokes while Kagiso Rabada was caught behind off Stokes having made 16. South Africa went to tea eight wickets down, and the last two wickets did not last long. James Anderson got debutant Hardus Viljoen leg before while Broad did the finish up job by taking a return catch to send back Faf du Plessis.

Needing only 74 to win, Alastair Cook and Alex Hales eased their way through in a 64-run partnership, before losing three in quick succession. Elgar had Hales lbw for 18 before going on to claim Nick Compton for a duck. Cook, rather uncharacteristically, hit seven fours in his 43 before he was caught behind off Morris with three runs needed. The South African collapse meant Kagiso Rabada’s maiden five-wicket haul in Tests (5 for 78) went in vain.