Ahead of Indian team's departure for West Indies, Team India skipper Virat Kohli addressed the media and, on expected lines, was asked the million-dollar question

Ahead of Indian team's departure for West Indies, Team India skipper Virat Kohli addressed the media and, on expected lines, was asked the million-dollar question -- is everything all right between him and deputy Rohit Sharma?

Not only did Kohli dismiss all reports of a problem between him and Rohit, but also added that such unfounded allegations were disrespectful to players' personal lives. He further claimed that people were feeding off lies.

Speaking to the media in Mumbai in a much-awaited press conference, Kohli stated, “I have heard a lot of things from the outside, If the atmosphere was not right then we would not have been able to come on top of ODI.” 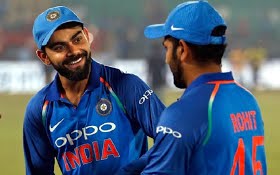 “In my opinion, it’s baffling. It’s ridiculous to read such stuff. We are feeding on lies and overlooking facts and creating fantasies and scenarios. Bringing personal lives into the picture is disrespectful. Baffling that lies are being floated.”

“You enter the dressing room and witness for yourself the kind of healthy atmosphere that’s there. Bizarre how lies are made to look believable.”

Kohli used the team's performance over the last few years to explain that if there were issues within the team, they wouldn't have done as well as they have.

Asked whether they would be any awkwardness in the dressing room owing to all the recent controversies, Kohli replied in the negative. “If I don’t like a person you will see that on my face. I have always praised Rohit, We have had no issues. I don’t know who is benefitting from this. we want to bring India cricket on top. You cant play with that kind of passion if players don’t get along.”

Reports of a rift between Kohli and Rohit have been rife ever since India's exit from World Cup 2019 in the semi-finals.

On their tour of West Indies, they will play two-three T20I games, three ODIs, and two Tests.