KKR vs RR: Kolkata and Rajasthan face off in virtual knockout

After having played 13 matches, it has all come down to their last game as Kolkata Knight Riders and Rajasthan Royals try to seal a berth for the playoffs.

After having played 13 matches, it has all come down to their last game as Kolkata Knight Riders and Rajasthan Royals try to seal a berth for the playoffs. The two teams will battle it out in match number 54 of the Indian Premier League season 8 at the Brabourne Stadium in Mumbai. With 14 points from 13 matches, Rajasthan have slipped to number five in the points table, and another loss would put them out of the tournament. Kolkata are still second with 15 points from 13 games. They will be in contention even if they lose, but there is no guarantee. Only a win can assure them a place in the top four. 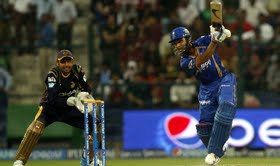 Rajasthan had a tough but realistic chance to claim a win against Chennai Super Kings after restricting them to a middling score. But, they gave away the opportunity with a poor batting display. Chasing 158 to win, they were held to a disappointing 145 for 8. This, in spite of getting off to an assured start. While Rajasthan would be aware of the same, they will have to put the loss behind them, and start afresh. What matters is how they perform of Saturday. The equation is pretty simple. If they win they go through. Having said that Rajasthan wouldn't have expected to find themselves in such a desperate situation after the rollicking start they had to the tournament.

Rajasthan must try and seek inspiration from the manner in which they began the season. It would help if Ajinkya Rahane can get them off to another of those wonderful starts, which he has done so consistently in the series. When that has happened, Rajasthan have barely failed. The performance of the other big names in the batting department -- Steven Smith, Shane Watson and Sanju Samson -- will also be crucial. This is a must-win game, and the stars must deliver. In the bowling department too, Rajasthan will need James Faulkner to stand up. He will of course need support from the likes of Dhawal Kulkarni and Stuart Binny, apart from Watson.

Like Rajasthan, Kolkata also messed up the chase against Mumbai Indians on Thursday. They were well placed to win thanks to Yusuf Pathan's blazing knock, but have only themselves to blame as they face a do-or-die sort of situation. Kolkata's batsmen failed to score even against the gentle medium pace of Kieron Pollard. The manner in which things panned out will have dented their confidence without doubt. But, they must look at the positive side. They still have a game in hand, and a real good chance to qualify.

Again, the top stars will need to put their hands up. The top three in the batting might end up being the key for Kolkata. Gautam Gambhir, Robin Uthappa and Manish Pandey, all have been in decent form for the team. But, things haven't exactly fell in place for them consistently. On Saturday, the team will have high hopes from them. In the bowling, the trio of Umesh Yadav, Morne Morkel and Piyush Chawla will have to deliver yet again. All said and done, it is Andre Russell who has been the team's trump card. He has been exceptional with the bat, has chipped in with wickets, and he's also renowned for his fielding. A good day for him may spell bad news for Rajasthan.