In a Test where England and New Zealand have exchanged turns to dominate, the hosts fought back to claim the upper hand on day four at Lord's.

In a Test where England and New Zealand have exchanged turns to dominate, the hosts fought back to claim the upper hand on day four at Lord's. The day began with the Kiwis having a clear advantage, but ended with England having wrestled back the initiative. Contrasting hundreds from skipper Alastair Cook and Ben Stokes put England in command at 429 for 6, giving them a healthy lead of 295 runs. The aggressive Stokes stroked 101 from 92 balls with the aid of 15 fours and 3 sixes while Cook was unbeaten on a patient 153, batting out the entire day en route to his 27th Test ton. What England's batting effort has done is opened a plethora of opportunities for the final day, where all three results can be possible. 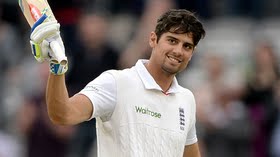 The day clearly belonged to England and their batters although the Kiwis had made an early inroad. Ian Bell, who has been struggling for runs, was sucked into edging an away going delivery from Tim Southee. New Zealand sensed a chance to go for the kill, but another big partnership between Cook and the in-form Joe Root subdued them. Root went to complete another impressive half-century, but at the time of his dismissal, England were still under 100 in the ascendancy, with six second innings left. This is where Stokes came in, and completely changed the complexion of the match. Even as Cook held one end up sturdily, Stokes took on the bowling, and New Zealand had no answer to this fire and ice partnership.

Stokes began with five crisp boundaries early in his innings before rain briefly interrupted play. When the match resumed, the all-rounder continued his aggressive ways. He was particularly severe on Southee, whom he launched for a number of boundaries. Southee tried a number of short deliveries after being driven earlier in the innings, but it Stokes continued to find the fence. He had luck on his side as well, as Doug Bracewell allowed a pull to rip through his hands, and an edge soon fell in no man's land. But, such are strokes of luck you get when you played audacious knocks. And, in the end, Stokes went on to complete what he had missed in the first innings, a Test hundred, off 85 balls, the fastest at Lord's.

Even as Stokes was firing on all cylinders, the England skipper was content in his own zone. When Cook reached a hundred, Stokes hadn't scored a run. But, by the time Stokes was dismissed for 101, Cook had only progressed to 124. It mattered least to Cook though. The fact is that the partnership benefitted the team. That is how Cook has always played the game, and will continue to do so. He rescued the sinking ship for England, first in the company of Root and then Stokes, and England turned the game on its head. Root may have missed on a hundred for the second time in the Test, but Cook batted on to cross 150.

New Zealand's bowlers had a forgettable day, with everyone from Southee to Trent Boult, Mark Craig and Matt Henry failing to make any kind of impression. England have enough to declare on the final day, and make a match of it. Whether they do it is another matter altogether.