India must give Sreesanth one last go at the international level

Shanthakumaran Sreesanth. Remember the break-dancing fast bowler who won as many fans as foes during his stay with the Indian team? Injury and poor form saw him drop out of the national side in 2011.

Shanthakumaran Sreesanth. Remember the break-dancing fast bowler who won as many fans as foes during his stay with the Indian team? Injury and poor form saw him drop out of the national side in 2011. He’s back on the domestic scene now, having undergone two operations and with two platinum nails inserted in his toes. At the outset, Sreesanth’s return to first-class cricket isn’t anything to be extravagantly pleased about. Yet, considering the paucity when it comes to India’s fast bowling resources one only hopes that the Kerala speedster returns to his best so that he can be given another shot at international cricket. 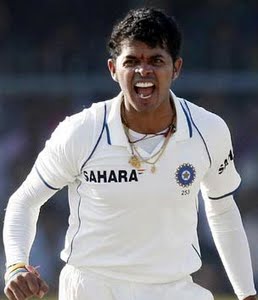 First things first, Sreesanth must admit that he has thrown away a lot of opportunities presented to him at the top level. His career figures clearly indicate the same –87 wickets in 27 Tests at an average of 37.59 and 75 wickets in 53 ODIs at a slightly better average of 33.44. His over exuberance to dominate the batsman has had a lot to do with his failures in international cricket. Okay, he shouldn’t be asked to do away with his aggression since doing that would mean taking away a major weapon from his armoury. At the same time, it is necessary that he tones down his hostility for it is hindering his success.

As of now, it is too early to expect Sreesanth to be chosen again for national duty. He first needs to prove himself at the domestic level, and show that he is still as hungry for success as he was during his early days in the game. At the same time, the selectors have to make sure that they don’t leave things too late in his case since he isn’t that young any longer. If he does perform well in the first-class games for a consistent period of time, he must be brought back into the Indian fold – one because Zaheer Khan’s international career is all but over and two because Ishant Sharma still isn’t good enough to take over the mantle of the senior bowler.

Although Sreesanth’s international figures may not suggest so, he is an exceptionally gifted bowler who, on his day, can overcome the best of opponents. His eight wicket match spell against South Africa during the 2006 Johannesburg Test is still considered among the finest bowling performances by an Indian seamer away from home. He continued to pick up wickets for the remainder of the series as well, but the failures of the Indian batsmen to deliver led to them ending up losing the series. The good times however did not continue for Sreesanth as he quickly faded away.

As recently as January 2011,Sreesanth gave proof of his ability, picking up a five-for in Cape Town during the drawn Test. Post that, he went back to his maverick ways. The paceman will turn 30 next month. It is about time he does justice to his talent.