Blistering half-centuries from Shreyas Iyer (58 off 29) and KL Rahul (56 off 26 balls) aided India in chasing down a tough target of 204 with an over to spare, in the first T20I against New Zealand

Blistering half-centuries from Shreyas Iyer (58 off 29) and KL Rahul (56 off 26 balls) aided India in chasing down a tough target of 204 with an over to spare, in the first T20I against New Zealand, at Eden Park in Auckland on Friday.

With the six-wicket triumph, India gained a 1-0 lead in the five-match T20I series. Apart from Iyer and Rahul, Indian captain Virat Kohli also chipped in with a crucial 45 from 32 balls. It was the fourth time India had chased down 200-plus in T20Is.

India was dealt with a huge blow early in the chase as opener Rohit Sharma was dismissed early for 7, playing across the line to Mitchell Santner. Rahul and captain Kohli then featured in a 99-run second-wicket stand, scoring at a quick rate to ensure India stayed in the game. 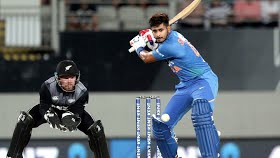 There was a huge moment in the game in the sixth over when Rahul and Kohli were involved in a horrible mix-up. Both the batsmen could have been run out at the non-striker’s end, but New Zealand fielders missed the stumps both times.

Rahul went on to register his 9th fifty in T20Is before eventually being dismissed for 56 from 27 balls. Kohli too was sent back soon after. He flicked Blair Tickner uppishly and was brilliantly caught by Martin Guptill in the deep.

Iyer, however, ensured the momentum stayed with India with a fluent knock. He hit five fours and three sixes in his impressive knock as India romped home. Manish Pandey made an unbeaten 14 and featured in a stand of 62 for the fifth wicket as India got home easily.

Batting first after being sent into bat by Kohli, the Kiwis rode on the fifties from Colin Munro, captain Kane Williamson, and Ross Taylor to put up 203/5 on the board. Martin Guptill (30 from 19) and Munro (59 from 42) added 80 for the first wicket. Williamson (51 from 26) and Taylor (54 not out from 27) ensured New Zealand crossed the 200 marks.

Speaking after winning the match, Iyer said, “Amazing to win a game overseas and finishing not out is special. We had lost quick wickets, so we had to build partnerships. We always knew we can score runs because this is a small ground. Looking forward to similar support in the remaining games as well.”

Indian captain Kohli asserted that they did not want to use any excuse of jetlag, and hence was pleased with the team’s effort. “Landing two days before and playing a game like this, it was fantastic. Felt like 80% support was for us and the crowd was right behind us. You need that sort of push chasing 200+. We never spoke of the jetlag in the team. We didn't want any excuse. We just focused on what we needed to do to win. We were looking forward to playing. We have done well in T20Is in the last one year. You can't be harsh on anyone on this sort of a pitch. I thought 230 was on at one point, but we pulled it back nicely,” the Indian skipper said after the methodical triumph.