I am ready to bat at any position in ODI cricket: Ajinkya Rahane

Veteran Indian batsman Ajinkya Rahane has been a crucial part of India’s Test squad ever since making his debut in 2013. In 65 Tests, he has 4203 runs at an average of 42.88 with 11 hundreds. However, despite consistent performances in ODIs, Rahane has found himself out of favour over the last two years.

The Mumbai batsman averages 35.26 in 90 matches having scored 2962 runs with three centuries. Still, the 32-year-old hasn’t played a single one-dayer since February 2018. Rahane though remains keen to made a comeback in the limited-overs format.

“I am ready to bat at any position in ODI cricket, whether opening or No. 4 or whatever, I am ready. My instinct answers yes, I want to make a comeback in ODI cricket. But when the opportunity will come, we don’t know. Mentally I am preparing to play all the formats. It is all about being positive yourself and about your abilities,” Rahane said while speaking to ex-India wicket-keeper Deep Dasgupta on ESPNCricinfo. 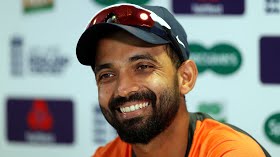 The versatile batsman has opened the innings, and has also batted at number four in ODIs, as per the demand of the team. He has done reasonably well at both positions. Rahane has 1937 runs in 54 matches as opener, and 843 runs in 27 games at number four at an average of 36.65.

Rahane could have been India’s answer to the jinxed number four spot for the 2019 World Cup, but was not even given a chance to prove his worth. “I have enjoyed opening the innings, but I don’t mind batting at number 4 if I am asked to. I have enjoyed both roles,” Rahane added.

“It is very hard to suddenly open the innings and adjust to it after you have been batting at No. 4 for a while, which I had done. It is hard to say which position I prefer. I can do well in both,” the batsman went on to explain.