With Australian cricketer Steven Smith being named the ICC player of the year as well as the Test cricketer of the year, we look back at his top 5 performances in 2015

105 against India in the World Cup semi-finals at Sydney: Smith was a thorn in India’s flesh throughout the team’s tour of Australia, and he added salt on the wounds of MS Dhoni’s men by coming up with a fluent hundred in the semi-final to break India’s winning streak in the 2015 World Cup. Smith hit 105 from merely 93 balls with 11 fours and 2 sixes. Thanks to him, Australia posted an imposing 328 on the board, and went on to win the match by 95 runs. Australia went on to clinch the World Cup with ease.

215 against England at Lord’s: Australia may have lost the Ashes, but during the Lord’s Test, they were totally dominant. And, Smith was the standout performer again for the Aussies. He batted for over 500 minutes, and scored 215, a marathon knock during which he hit 25 fours and a six. Australia ended up posing a massive 566 for 8 on the board. Smith added another fifty in the second innings as well, as Australia ended up winning the Test by 405 runs.

143 against England at the Kennington Oval: The Ashes was lost, and Australia were playing for pride. Smith, who was still playing under Michael Clarke in the series, rose to the occasion again. The Aussies batted first, and Smith eased his way to 143 from 252 balls, a knock featuring 17 fours and 2 sixes. Australia ended up posting 481, and thanks to an excellent all-round bowling effort, they ended up winning by an impressive margin of an innings and 46 runs. They also managed to finish the Ashes on a respectable 2-3 scoreline.

138 against New Zealand at Perth: Mitchell Johnson’s farewell Test was a high-scoring draw, most remembered for Ross Taylor’s heroic 290. Smith also played his part in making the Test one full of runs. After New Zealand had responded with 624 to Australia’s 559, Smith blasted 138 from 185 balls with 18 fours as Australia declared their second inning on 385 for 7. Yet again, Smith left his mark on a series. It has been that kind of a year for the Aussie skipper. 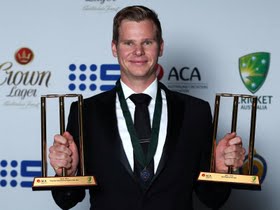 199 against West Indies at Kingston: West Indies also faced the wrath of Smith’s belligerent form. In the Jamaica Test, he was all over the West Indian bowlers, and was unlucky to miss out on a double hundred. He had batted for 361 minutes and 513 balls when he was dismissed lbw by Jerome Taylor one short of 200. Although Smith would have been disappointed on missing out on a milestone, the knock, in which he hit 21 fours and 2 sixes, was enough for him to clinch another man of the match award, as Australia won the Test by 277 runs.