Rohit Sharma as an opener in Tests? MSK Prasad drops a strong hint

India’s chief selector MSK Prasad has admitted that the Test form of KL Rahul is a worry for the team and that there is a possibility of Rohit Sharma being tried out as opener in the longer format as well.

Sourav Ganguly and VVS Laxman are among the former Indian players who have opined that Rohit should be given a chance to open in Tests. KL Rahul, who played in the two Tests in West Indies, managed only 101 runs. On the other hand, Rohit, who had a sensational World Cup 2019, scoring five hundred, was part of the Test squad but did not get a chance to play as Hanuma Vihari was preferred over him and performed brilliantly. 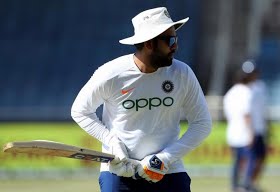 Asked about the selection conundrum pertaining to the opening slot, MSK Prasad admitted to India Today in an exclusive interview that, "As selection committee, we haven't met after the conclusion of the West Indies tour. We will definitely take this (of Rohit as an opener in Tests) point into consideration when we all meet and discuss it.”

Prasad also admitted that the form of Rahul is a definite worry, but stated that he is a great talent and what he needs is the time in the middle. "KL is definitely a great talent. Of course, he is going through a bit tough time in Test cricket. We are definitely concerned about his form. He needs to spend more time on the wicket and regain his touch and form,” he further added.

India’s next Test assignment will be during the home series against South Africa, where they will play three five-day games against the Proteas, which will be preceded by the three T20 games. The team for the same has not been announced and there is a possibility that Rohit may be considered as an opener for this series.

In the same exclusive interview to India Today, the former India wicket-keeper also confirmed that wrist-spinners Yuzvendra Chahal and Kuldeep Yadav are not out of contention from the T20 format and the likes of Rahul Chahar are being tried to maximize the options for the T20 World Cup.

"In order to bring variety in the spin bowling department, we have been trying youngsters keeping in view of the T20 World Cup in Australia. Chahal and Kuldeep have been outstanding performers in the shorter formats in the last two years. They are definitely ahead in the race now. It's just that we are trying a few other options now," he added in the interview.

After exiting the World Cup in the semis stage, India had a successful tour of West Indies, winning across all formats. They now take on South Africa at home, with the first T20 at Dharamsala on September 15.