An unbeaten 25th Test Century from 37-year-old Shivnarine Chanderpaul has put West Indies on top at the Kensington Oval. Chanderpaul’s 103* has helped West Indies to post a healthy first innings total of 449 for 9 declared. The hosts then got to bowl 9.5 overs before stumps on Day 2 in which Australia got through safely to 44 for 0. 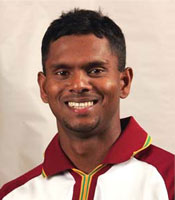 West Indies resuming the second day’s play at 179 for 3 got a solid partnership of 73 between Darren Bravo (51 from 123 balls with 7 fours and a six) and Chanderpaul. West Indies didn’t get big partnerships after that but almost every player supported Chanderpaul to put up important runs. Skipper Darren Sammy chipped in with an entertaining 41 from 36 balls with 4 fours and 3 sixes.

Chanderpaul remained unconquered on 103* from 248 balls with 9 fours and a six before the declaration came. For the hosts, Ed Cowan got to 13* and David Warner got 27* by stumps.