Fun feature: Who can promote what?

Indian captain M S Dhoni has been appointed brand ambassador of cricket in Nepal, with the aim of promoting the game as well as tourism in the country. In a lighter vein, we look at imaginary clubs that some cricketers/ administrators would be very good at promoting.

Indian captain M S Dhoni has been appointed brand ambassador of cricket in Nepal, with the aim of promoting the game as well as tourism in the country. In a lighter vein, we look at imaginary clubs that some cricketers/ administrators would be very good at promoting.

S. Sreesanth: ‘I’m either injured or in controversy’ club 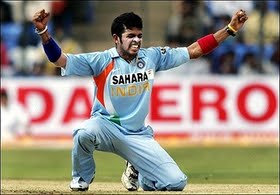 The latest we hear is that the maverick paceman from India allegedly displayed ‘boorish’ behaviour on board a Bangalore-Delhi flight a few days ago. The pacer, who is recuperating from an injury which forced him to miss the fifth edition of the IPL, has been controversy’s favourite child ever since he stepped into the international arena. While everybody is aware of his IPL 2008 antics, famously named ‘slapgate’, his consistently unacceptable on-field behaviour forced even skipper M S Dhoni to admit that he cannot handle the temperamental fast bowler. Are the selectors secretly happy that the Kerala speedster is injured?

BCCI: ‘Only the IPL exists’ club

Only BCCI can do this. They encourage players from all over the globe to participate in the Indian Premier League, but refuse to let their players feature in T20 leagues hosted by other countries. Last year, they did not allow Indians players to travel to Sri Lanka, as a result of which the Sri Lankan Premier League (SLPL) had to be postponed. This time round as well, the Indian cricket board has refused to let any player take part in the SLPL. Their reasoning – if they let players feature in SLPL, they will have to let them appear in T20 leagues organised by other Test playing nations as well. What can one call this, hypocrisy?

Harbhajan Singh: ‘I am the next Vinod Kambli’ club

Even since being axed from the Indian team, Harbhajan Singh has been all over television screen. And except for the IPL, his presence has had nothing to do with cricket. He became the goodwill ambassador of a wrestling show, accompanied Sri Lankan Sanath Jayasuriya in a dancing show, and has been in the news more for his alleged affair with Bollywood starlet Geeta Basra. As for his cricket, it is difficult to recall his last good on-field performance.

The battle between the left-hander and the WICB may have been sorted out for now, but considering the number of times there have been run-ins between the two warring parties, it wouldn’t be surprising if Gayle finds himself out of the team again. When not playing for West Indies, Gayle travels around the world, trashing bowlers in various T20 leagues. It would be difficult to recollect the number of teams he has played for over the past year. T20 bowlers across the globe are heaving a sigh of relief for sure.

Denesh Ramdin: ‘I’ll perform only if you criticise me’

West Indies cricketer Denesh Ramdin hadn’t performed in ages, which prompted Sir Viv Richards to comment that Ramdin wasn’t doing his job well. The result – Ramdin responded with a hundred and a note which read, ‘Yeah Viv talk nah’. If such constructive criticism encourages the West Indian to perform well, he should be constantly ‘attacked’ on the eve of every game!