An upbeat Hyderabad will host Bangalore at the Rajiv Gandhi International Cricket Stadium in Hyderabad on Sunday in match 11 of the Indian T20 League 2019. BAN had a terrible start to the season, folding up for just 70 against Chennai , while they were unlucky to lose a close game against Mumbai owing to the no-ball controversy.

In contrast, Hyderabad managed to claim an impressive victory against Rajasthan after they were stunned by Kolkata in the first match. The biggest plus for Hyderabad has been the form of David Warner, who has been brilliant in both the matches so far.

Warner has found a reliable opening partner in Jonny Bairstow while Vijay Shankar also made an impression with a 16-ball 35 in the previous match. In the bowling, Bhuvneshwar Kumar was taken apart in the match against Rajasthan but Rashid Khan held fort with a good all-round show. 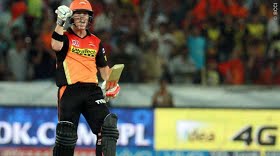 Bangalore have a big task on hand after two defeats. Virat Kohli will be keen to set the Indian T20 League on fire. AB de Villiers proved that while he may have retired from international cricket, there’s still a lot of firepower left in him.

In the bowling, Yuzvendra Chahal recovered from Yuvraj Singh’s big hits to finish with four wickets but the likes of Umesh Yadav, Navdeep Saini and Colin de Grandhomme will need to do more. Above all, they will need to get over the no-ball controversy that stunned them against Mumbai.