Preview, Live Scores: CSK would like to end their losing streak against RCB

Chennai Super Kings will take on the inform Royal Challengers Bangalore at MA Chidambaram Stadium, Chennai. Chennai have lost their last two games and they would ideally like to end their losing streak at their home ground whereas visitors will eye on continuing their winning. CSK is second and RCB is at the third spot, so both teams would step on the field to put a strong performance on the ground and take one step more toward the playoff. 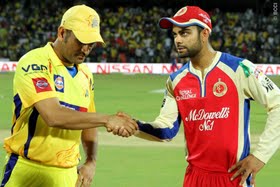 Nothing have gone Chennai’s way in the last two games, their batsmen are looking to score quick fire and losing their wickets in between. Openers have given the team a quick start but not carried their inning forward. The form of the middle order will also be a point of concern for the home team. Suresh Raina, MS Dhoni and Faf du Plessis has not much to show as far as their batting is concern. Bowling too not looking up to the mark for Chennai, Ravindra Jadeja has not been able to produce the result which were expected from him. The absence of Ravichandran Ashwin can hurt them as he could have been very handy on his home soil. Mohit Sharma and Ashish Nehra have been expensive from last few matches. Irfan Pathan might get his first game of this season otherwise the team is expected to be same as they played against Sunrisers Hyderabad.

Royal Challengers Bangalore will have to continue their performance to cement their spot in the playoffs. They are looking now well balance side with little change in batting order. Mandeep Singh was their star in the last match and Sarfaraz Khan in the match before that. So, there seems to be a depth in their batting line up. But the key for the RCB will the runs from their top order batsmen, they will have to lay the foundation for the middle order. RCB is looking very settled now so there not much change in the playing squad is possible from here.

CSK are always a team to beat on their home ground and with RCB in form, this game should go to the wire and a good contest is expected from these two teams.