Two struggling teams with captains who lead the national side in international cricket will face off at the Chinnaswamy Stadium in Bangalore on Saturday.

Two struggling teams with captains who lead the national side in international cricket will face off at the Chinnaswamy Stadium in Bangalore on Saturday. Royal Challengers Bangalore, led by Virat Kohli, are placed way down at number seven, with only two wins so far. Pune, on the other, hand, have only done slightly better. They have won three matches so far, and are just one place above Bangalore in the points table. Neither side has really performed to potential so far. As a result of the same, they now find themselves in a position where another loss could go a long way jeopardising their chances of making it to the knockouts. 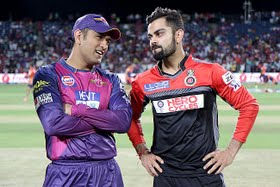 Pune, while they have been extremely disappointing, will go into the match on a confident note having defeated a reasonably strong Delhi Daredevils outfit the previous match. Their bowlers did a good job to restrict Delhi in the match. They have a canny customer in Rajat Bhatia, who has been using his skills resourcefully. Then, there is Ashok Dinda, who may prove to be a bit expensive, but has the knack to pick wickets. In the last match, Scott Boland came to the party, and was among the wickets. However, Ravichandran Ashwin still needs to get back to his best while Murugan Ashwin also proved to be expensive in the previous match.

In the batting department, they have been heavily dependent on Ajinkya Rahane, and he again came to the team's aid against Delhi. Rahane anchored the innings nicely to ensure victory for Pune. The franchise has been handicapped by injury problems to big names like Kevin Pietersen, Steve Smith, Faf du Plessis and Mitchell Marsh. In that context, the quick 30 by Usman Khawaja at the top of the order, on IPL debut, was important. Skipper MS Dhoni, Saurabh Tiwary and big-hitter Thisara Perera also chipped in with quick knocks. At the end of the day, it was an impressive effort.

Everything about Bangalore's bowling woes have been documented so far, but nothing really has changed. In spite of a number of changes, Bangalore have failed to find the consistency or the talent needed to stop the opposition from going after them. Perhaps the time has come to try out Chris Jordan, who was brilliant for England in the World T20. He possesses the art to stop the batsmen from going after them courtesy his yorkers, and perhaps it is time for Bangalore to try him out, and figure whether he is the answer to their bowling woes.

If their bowling is sorted out, they really have everything going for them in the batting department. Virat Kohli has been in the form of his life for a while now, and isn't showing signs of slowing down. AB de Villiers has only recently had a couple of poor scores, after a terrific start to the tournament. In Shane Watson and Sarfaraz Khan, they have two big-hitters, who can take on any attack. The only worry in the batting is the form of Chris Gayle. If he can get it right, even Bangalore's bowling woes would be put on the backburner.