IPL 2020 9th Match KXIP v RR Scores: We witnessed one of the most spectacular comebacks in the history of the game as Rajasthan Royals secured an unbelievable win over the Kings XI Punjab to register the highest chase ever in IPL history.

Steve Smith won the toss and put the opposition to bat, a decision he must have regretted at the halfway stage. KXIP’s skipper KL Rahul came to open alongside Mayank Agarwal and gave their side a blazing start. Agarwal hit three boundaries in the first two overs and Rahul smashed three consecutive fours off Jofra Archer, to give a glimpse of what was going to be the order of the day. Punjab reached 60-0 after just six overs, thus scoring the highest number of runs in powerplay in this year’s IPL, a record that would be broken in the second innings. 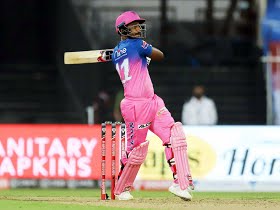 Clueless Rajasthan resorted to leg spin to pull them from troubled waters but in vain as Mayank Agarwal took a particular liking to Rahul Tewatia and smoked him for 16 runs of 3 balls in his very first over, which turned out to be his last in the match. Similar was the case with Shreyas Gopal and the score at the end of 12 overs read 138-0, with both of the batsmen crossing fifties. At that stage, 250 was on the cards and the openers carried on with carnage.

In the 15th over, Agarwal got to his well deserved century with a boundary over extra cover. Soon after that, both the batsmen got out while trying to hit the big shots. Maxwell and Pooran were at the crease now and started going from the word go. While Maxwell struggled, Pooran was able to middle three sixes and a four as Punjab finished at 223-2.

Chasing a humongous target, Rajasthan had to start strong. They had just the right ammunition as Buttler and Smith came to bat. Unfortunately, they lost Buttler early to Cottrell as previous match hero Sanju Samson joined his skipper at the crease. Both of them played some magnificent shots and kept the hopes of an improbable chase alive. Steve Smith in particular, took the initiative and went after almost every ball in search of a boundary. In the process, he registered a fifty of just 26 deliveries but got the very next ball as required rate was climbing up and he just had to go for it.

Rahul Tewatia came in surprisingly at number four but ate up all the momentum. While Sanju Samson was striking it sweet from the other end, Tewatia was struggling to even rotate the strike, let alone hit the big ones. Tewatia was at 8 runs off 19 balls at one stage and the commentators on air even called for him to retire out for his team’s sake as better batsmen like Uthappa were still yet to bat.

It seemed like all was lost for Rajasthan with the 84 required off the last 30 balls, but Sanju gave a glimmer of hope as he smashed Maxwell for 21 runs in the 16th over. But all that hope went for a toss as Shami got rid of Samson the very next over for a classy 85. However, we were in for some epic drama as Tewatia turned the tables and smoked five sixes off Cottrell in the 18th over to bring down the required rate down to almost 10 ! Archer came in as Uthappa got out and muscled two massive sixes to effectively end the match, though Tewatia and Parag later got out trying to hit the winning runs. Finally, Tom Curran had to come and finish the match with a four off Ashwin.