SA vs ENG 1st Test: England needed less than an hour to wrap up the Durban Test, and go 1-0 up in what is expected to be a close contest against South Africa -- the first time they have won the opening match of an overseas series in a decade.

England needed less than an hour to wrap up the Durban Test, and go 1-0 up in what is expected to be a close contest against South Africa -- the first time they have won the opening match of an overseas series in a decade. The final day lasted all of 24 overs as the Proteas crumbled to 174 all-out, and handed a comprehensive 241-run triumph to the visitors. If Steven Finn set up the match for England on the previous day, off spinner Moeen Ali finished off the South Africans with three wickets, which put the visitors on the path of victory very early in the day. Moeen ended the match with seven scalps, his second best returns after the eight he claimed against India last year. 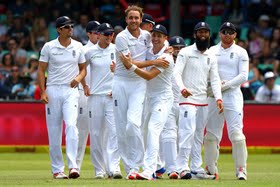 South Africa's faint hopes of survival rested with the one and only AB de Villiers. But, that little glimmer of hope disappeared within minutes of final day's play. With his third delivery, the off-spinner got one to straighten at de Villiers. The batsman was deep in the crease, and the umpire raised his finger. De Villiers expectedly went for a review, but there was no reprieve for him. With de Villiers gone, victory was to be a mere formality for England. The end came 20 minutes before lunch when Stuart Broad trapped Morne Morkel lbw, leaving JP Duminy stranded.

With the result a formality, it was still a chance for the likes of Temba Bavuma to spend some time out in the middle. But, the batsman was not awake to the challenge. Bavuma was drawn out of his crease by Moeen, and the ball did enough to move past the edge of the bat. More importantly though, Jonny Bairstow, whose keeping skills were under serious scrutiny managed to gather the ball cleanly and effect a stumping. It was a simple chance, but getting the basics right would have pleased Bairstow. The good day became better for Moeen as he trapped Kyle Abbott in front of the stumps.

Finn did not have much of a role to play, but he troubled nightwatchman Dale Steyn, and was eventually rewarded as the fast bowler had his off-stump pegged back. If James Anderson is fit for Cape Town, Chris Woakes would be the pacer sitting out. He also made a contribution on the final day, sending back a sticky Dane Piedt. Senior statesman Broad then came in to claim Morkel and bring joy for England.