CWC 2015 NZ vs WI Quarter final: If all goes according to predictions, New Zealand should easily overcome West Indies in the fourth quarter final of the 2015 ICC Cricket World Cup, and book their place in the semi finals.

If all goes according to predictions, New Zealand should easily overcome West Indies in the fourth quarter final of the 2015 ICC Cricket World Cup, and book their place in the semi finals. After all, New Zealand have been the invincible team so far, along with India, having won all their clashes in the league stage, most of them comfortably. West Indies, on the other hand, have huffed and puffed their way to the last eight, losing to Ireland, India and South Africa, but beating Pakistan, Zimbabwe and UAE. Looking at the current form of New Zealand, West Indies will have to play out of their skins to get the better of the co-hosts.

If Kiwis play according to potential on Saturday, there is no reason why they cannot overcome the West Indians with ease. The performance of their skipper Brendon McCullum has been sensational at the top. 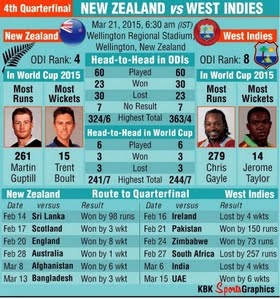 Bangladesh found a way to tame him by taking the pace off the ball. Will West Indies attempt something similar? Martin Guptill too will be going into the quarter final with a hundred against his name so that should give him confidence. Kane Williamson at number three has been effective as well. The form of Ross Taylor, Grant Elliott and Luke Ronchi remains a worry for them.

If you look at New Zealand's bowling, it has been among the most impressive of all sides, again on par with India. Trent Boult and Tim Southee have taken turns to jolt the opponents, and they have hardly managed to recover from those poor starts. Daniel Vettori has stood out. In spite of his experience, he was expected to play the containing role, but as Stephen Fleming has put it, he has exceeded expectations. Adam Milne and Corey Anderson were expected to be the weak links in the New Zealand bowling, but they have coped up well with the pressure so far.

West Indies have been inconsistent as ever. Their loss against Ireland was a shocker, but their victory over Pakistan was equally impressive. Like in the Pakistan-Australia game, West Indies' unpredictably remains a threat for the Kiwis. Chris Gayle has played only one innings of note so far, but if he is fit, and fires against the Kiwis, all the equations will go out of the window. Marlon Samuels too has only had one good game, but he too has the ability to up his game. Youngsters Johnson Charles and Jonathan Carter for fifties against UAE, so that should please them. Lower down the order, Darren Sammy and Andre Russell have also contributed. But, the poor form of opener Dwayne Smith remains a major cause of concern.

West Indies lack quality in the bowling as well, when compared to New Zealand. Jerome Taylor has the only one who has consistently looked threatening, and has been rewarded with wickets regularly. Jason Holder has a long way to go, not only as skipper, but as a medium pace bowler as well. He just doesn't seem to possess the pace to trouble high-quality batsmen. Sammy and Russell are good fill-in options, but the absence of Sunil Narine is undoubtedly hurting them. Looking at the balance of the two sides, the contest between Windies batting and Kiwi bowling may decide the fate of the Wellington encounter.