India continued their domination with the bat on day two of the Hyderabad Test at Uppal. Resuming at 111, Indian captain Virat Kohli went on to record fourth double hundred in as many series.

India continued their domination with the bat on day two of the Hyderabad Test at Uppal. Resuming at 111, Indian captain Virat Kohli went on to record fourth double hundred in as many series.

Wicket-keeper batsman Wriddhiman Saha, added insult to injury to Bangladesh compiling a hundred of his own. India declared their innings on 687/6. In response, Bangladesh finished the day at 41 for 1 in 14 overs, losing the wicket of Soumya Sarkar. 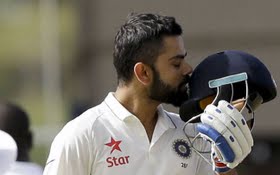 Kohli was dismissed immediately after completing his two hundred, lbw to left-arm spinner Taijul Islam for 204. His innings comprised 24 fours. He faced a total of 246 deliveries.

Saha and Ravindra Jadeja continued to keep Bangladesh bowlers at bay. Saha went on to notch up his second Test ton while Ravindra Jadeja made an easy 60. Both were unbeaten when Kohli decided to call time on the innings.

Earlier in the day, Ajinkya Rahane narrowly missed out on a century on comeback. He had eased his way into the 80s, only to be dismissed 18 short of a Test ton. Rahane featured in a 222-run stand with skipper Kohli. Ravichandran Ashwin also enjoyed himself, chipping in with a brisk 34 from 45 balls.

Bangladesh were stubborn in response, but a smart DRS call by Umesh Yadav and skipper Kohli got them the much-needed before stumps.