The Bangalore Test between India and New Zealand will be settled pretty much by two factors: how well the Kiwi batsmen face the Indian spinners, and also how much the weather plays spoilsport, considering rain is forecast to be around for the coming days.

The Bangalore Test between India and New Zealand will be settled pretty much by two factors: how well the Kiwi batsmen face the Indian spinners, and also how much the weather plays spoilsport, considering rain is forecast to be around for the coming days. The latter element is not in the teams’ hands, but the New Zealanders can definitely improve their chances of at least drawing the game if not winning it, by putting up an improved batting performance. 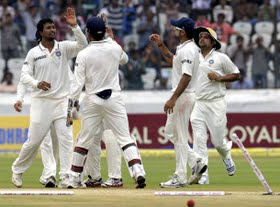 At Hyderabad, it was clear that they had no answers to the questions posed by India’s spin twins – R. Ashwin in particular. If they are looking for positives, they can take solace from the fact that the Bangalore surface won’t offer as much assistance to spin as Hyderabad. The visitors cannot depend on that alone though. While it is a fact that just like India struggles in New Zealand’s swinging conditions, so too do Kiwi batsmen battle to play spin. However, they must believe that they have a batting outfit that can perform much better than the show they put up in the first Test. For that, at least a couple of New Zealand batsmen need to come up with hundreds, which calls for a lot of patience.

The primary reason why the failed in West Indies and in the first Test here is because none of the batsmen have managed to capitalise on starts. There are players in the present New Zealand side who have the ability to play the big knocks and thwart India. The question is whether they are mentally prepared for the grind. Martin Guptill, Brendon McCullum, Kane Williamson and skipper Ross Taylor comprise the top four of the Kiwi batting line-up, and each of them is capable of coming up with big knocks. Williamson and Guptill are still relatively inexperienced, so their flaws could be understood, but McCullum and Taylor, being the seniors in the side, need to be setting the right example, which they certainly haven’t been doing. Bangalore gives them another opportunity to set things right.

For India, the win at home was a great relief following the catastrophes in England and Australia. Yes, India were always expected to win at Hyderabad, but following the absence of Rahul Dravid and VVS Laxman, there were apprehensions over how the team would shape up. For now, the team think-tank should be pleased since Cheteshwar Pujara marked his return to Test cricket with a solid ton, and Virat Kohli continued his good run, with a half-century.

The only problem area for India remains the form of Suresh Raina. Will he get another chance to resurrect his career at Bangalore or will S. Badrinath be drafted in.

At home, India’s bowling seems safe in the hands of Ashwin, Ojha and Zaheer. It will all come down to how Kiwi batsmen tackle them over the next few days.