Sri Lankan big guns have a point to prove Down Under

Considering the natural talent that the Sri Lankans possess it is somewhat surprising to note that they are yet to win a Test in Australia. Following Lanka’s batting collapse on the first day of the Boxing Day Test at the captivating Melbourne Cricket Ground (MCG), we tried to figure out the reason.

Considering the natural talent that the Sri Lankans possess it is somewhat surprising to note that they are yet to win a Test in Australia. Following Lanka’s batting collapse on the first day of the Boxing Day Test at the captivating Melbourne Cricket Ground (MCG), we tried to figure out the reason. And we came to the conclusion that one of the key reasons why the Lankans have failed to trouble the Aussies in Australia is because their big names with the bat have failed to rise to the occasion, with the exception of Kumar Sangakkara, whose quality has stood out in testing conditions. Here’s an analysis of Sri Lanka’s experienced batsmen and how they have failed to perform in Kangaroo land. 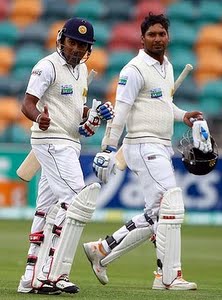 Mahela Jayawardene: The skipper himself has been one of the biggest culprits when it comes to failing to perform in Australia. In six games that he has played in Australia, he has managed only 308 runs at an average of 28, which at best suits a lower order batsman. He has managed to cross the hundred mark once, but that is far from enough to make up for his failures. Overall, Jayawardene averages 49.86, which is significantly higher that his average in Australia.

Tillakaratne Dilshan: The opener kicked off the first Test of the current series with a spanking hundred. This is one of the reasons his average has climbed to a respectable 42.66 from four Tests played in Australia, a shade better than his career average of 41.30. The point though is that he has managed only 256 runs from four games Down Under, and needs to be more consistent if Lanka are to set a good platform for the middle-order. His contribution is even more crucial considering his opening partner Dimuth Karunaratne is a novice.

Kumar Sangakkara: The only batsman from the reputed list who has performed to potential. To succeed in tough conditions in Australia, one needs to be extremely hard-headed. And Sangakkara has shown that quality in abundance. The same reflects in his figures in Australia – five Tests, 516 runs at an average of 57.33 with 192 as his best score. Sangakkara’s figures in Australia are on par with his career figures. He averages over 55 in Tests. From what’s been on offer so far, he is set to come back with his reputation in tact although he would like bigger scores than he has been getting.

Thilan Samaraweera: This veteran Lankan has often been derided for not performing in conditions away from home. His record in Australia gives credence to such talk. In five games, he has scored just 202 runs at an unacceptable average of 22.44 with a highest score of 70. These stats are in stark contrast to his overall career figures –an average of 50.36 in 79 Tests with 14 hundreds. Unless he does something substantial on this tour, he will be remembered as an enigma of Lankan cricket post retirement, which he might announce soon, it has been reported.