Bangladesh may not have tasted a great amount of success in Test cricket ever since their entry in 2000. But, over the last few years, they have definitely begun to make an impression, at least at home.

Bangladesh may not have tasted a great amount of success in Test cricket ever since their entry in 2000. But, over the last few years, they have definitely begun to make an impression, at least at home. Against New Zealand, in particular, they have been penetrative in recent times at home. Their performance in the Chittagong Test, where they matched New Zealand in every department was the latest reminder of the fact that they are no longer pushovers while playing in familiar conditions. The draw notwithstanding, there were plenty of gains for the hosts. 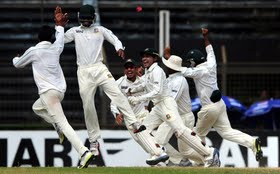 Sohag Gazi’s performance in the Test was standout. His hundred under pressure batting lower down the order ensured that Bangladesh got past New Zealand’s big first-innings total. Then, while bowling in New Zealand’s second innings, his hat-trick ensured that the Kiwi innings which was going very strong got derailed, and any faint hopes they had of making a match out of the big scoring encounter disappeared. Gazi also picked up other key wickets to finish with six for the innings, and eight for the match. Following the Test, Gazi became the first Test cricketer to score a ton and register a hat-trick. He couldn’t have asked for more; of course a Test win would have been awesome.

Apart from Gazi there were many other good performances from the Bangladesh side. Mominul Haque’s 181 was outstanding in the context of the game. After New Zealand had out up a big score batting first, Bangladesh were in major trouble having lost their openers with the scoreboard still in single figures. Haque however absorbed the pressure brilliantly, and his marathon knock brought the match back on an even keel. By the time Haque was dismissed, a stint which lasted nearly 380 minutes, Bangladesh had moved into a comfortable position.

While Gazi and Haque were the big heroes, important contributions came from some of the others as well. Skipper Mushfiqur Rahim got a painstaking half-century while Nasir Hossain got a quick 46 that further added to New Zealand bowlers’ woes. Quality all-rounder Shakib Al Hasan got a couple of wickets in Kiwis’ first innings and quick-fire, unbeaten 50 in Bangladesh’s second innings as the game was heading towards a draw. After failing in the first essay, opener Tamim Iqbal also spent some precious time at the crease a second time round.

New Zealand themselves managed to gain a few psychological points during the draw even though it must be said that they would have liked to be more dominant. Still, Kane Williamson had a memorable Test, scoring a century and a half-century. Wicket keeper BJ Watling also impressed with his century lower down the order. Further, opener Peter Fulton got half-centuries in both innings while ex-skipper Ross Taylor got one in the second. There wasn’t much in the bowling as most of them are still raw. For the record, Doug Bracewell grabbed three while debutants Ish Sodhi and Corey Anderson were among the wickets as well. --By A Cricket Analyst