Nagpur Test preview: India look to spin South Africa out of the series

IND vs SA 3rd Test Preview, Live score: With rain having washed out all but one day of the Bangalore Test, India will now be keen to get back to their winning ways at Nagpur. The pitch at the Vidarbha Cricket Stadium is expected to be another turner, and India will look up to their spinners to do a majority of the damage again.

With rain having washed out all but one day of the Bangalore Test, India will now be keen to get back to their winning ways at Nagpur. The pitch at the Vidarbha Cricket Stadium is expected to be another turner, and India will look up to their spinners to do a majority of the damage again. From what has been on show so far, even the experienced South Africa batsmen, barring the one man -- does he need to be named? -- have looked all at sea as the ball has played tricks. India must seek to continue their domination, and not take things lightly at Nagpur even though they find themself in a dominant position.

Off-spinner Ravichandran Ashwin was always going to be the key if India wanted to exploit the conditions on offer. And while he has been in excellent form over the last few months for India across formats, the team think-tank would have been a bit worried considering Ashwin was returning from injury. But, the offie has done exceptionally well to put India in command. In both the matches, he has been at the top of his game, never allowing the batsmen any sort of leeway. Not only has he maintained a tight line and length, but has also kept picking up key wickets at regular intervals. Nothing less will be expected at Nagpur.

The series has also marked the return of Ravindra Jadeja to international cricket after a brief stint out of Team India. There were question marks over his selection for he had lost his sheen significantly in recent games. But, under spinning conditions in India, he is back to his best. The way he has bowled so far, it hasn't seemed as if he was ever out of the team. The angles created by the left-arm spinner, going round the wicket, and delivering it from wide of the crease, have bamboozled highly acclaimed batsmen like Hashim Amla and Faf du Plessis. That says a lot about the kind of impression Jadeja has made in the series thus far. 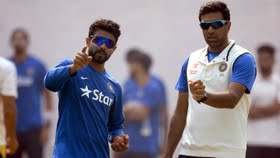 Although the conditions have been in the spinners' favour, India surprisingly decided to leave out Amit Mishra at Bangalore. The leg-spinner may have claimed only three wickets in the opening Test, but he twice dismissed AB de Villiers clean bowled, and that was a significant achievement. There was no reason to leave him out at Bangalore. India could have created psychological pressure on de Villiers in his 100th Test, which they failed to do. Stuart Binny was played in place of Mishra in the previous Test, and he expectedly did not make a difference. India will do well to go back to Mishra at Nagpur.

While the spin department is strong for now, the pace attack is a cause of concern. It is fact that the fast bowlers do not have much of a role to play in Indian conditions. At the same time, someone in the mould of Zaheer Khan, who can come in and contribute with key blows can help. India lack that liberty as of now, and are completely dependent on the spinners. Ishant Sharma will have to try and play that role in Nagpur. It will be a toss up between Varun Aaron and Umesh Yadav for the second pacer's slot, neither of whom has impressed. All said and done, it will all again come down to India's spinners against South Africa's batsmen.