If it’s cricket, it cannot get bigger that India versus Pakistan. But, over the last decade or so, South Africa and Australia have developed a rivalry that runs Indo-Pak encounters close.

If it’s cricket, it cannot get bigger that India versus Pakistan. But, over the last decade or so, South Africa and Australia have developed a rivalry that runs Indo-Pak encounters close. No one will ever forget the clashes between the two sides during the 1999 World Cup. In recent years, South Africa have even gone on to win a Test series against their fancied opponents. But, they would be going into their latest clash against Australia with a hint of dejection, knowing well they should have overcome Pakistan. The Aussies, in contrast, bludgeoned India into submission. How much the two performances count on Sunday remains to be seen though. 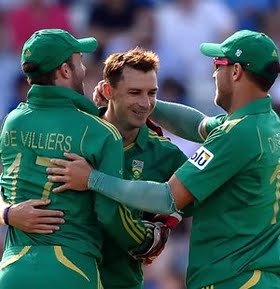 If the batting performance against Pakistan was anything to go by, South Africa have a lot of work to do to shape up. Although, Australia do not have spinners of the class of Saeed Ajmal and Shahid Afridi, they would have taken note of South Africa’s struggles for sure. Richard Levi, in particular, has been a hit and miss guy, and South Africa cannot afford him to throw his wicket in the manner he did against Pakistan – trying to reverse sweep Ajmal’s first ball and getting bowled through the gate.

Considering the significance of the occasion, the Proteas would be looking up to their experienced guys to put their hands up. It goes without saying that Hashim Amla and Jacques Kallis would be expected to get big scores. The role of skipper A B de Villiers will also be crucial, since he scores at such a fast pace, and could the one man who could thwart the Aussie bowling line up. South Africa, meanwhile, need to figure out how to utilise Albie Morkel better. At the moment, he is being wasted down the order. Their death bowling must alsoshow improvement. They have four very good bowlers in Dale Steyn, Morne Morkel, Johan Botha and Robin Peterson, but a couple of poor overs towards the end cost them the Pakistan clash.

If South Africa want to find a weakness in Australia’s game, it is a rather obvious one. Shane Watson has been doing most of the scoring, and he is also picking most of the wickets for his team. Three matches, and three man of the match awards. What more can you ask for from your premier all-rounder? While it would be unfair to expect Watson to continue delivering in both departments game after game, Aussies would be hoping that his excellent run continues at least till the end of the tournament. Remember, this is one World Cup Australia are yet to capture. Having said that becoming over-dependent on Watson can hurt them as well.

Australia would have been pleased to see David Warner get among the runs against India. Warner and Watson versus Steyn and Morkel would be one hell of a contest to watch out for. The Aussies also lifted their bowling against the Indians, with both Pat Cummins and Mitchell Starc deceiving M S Dhoni’s men with their pace. South Africa will be expected to put up a better fight, but whether they have improved drastically against spin remains to be seen. Even the Indians struggled to pick Brad Hogg, and going by that rationale, the left-arm spinner could come into the picture as a major force.

An Aussie win would take them into the semis, while South Africa would stay alive if they emerge triumphant.