Kolkata Knight Riders will have their task cut out when they take on a high-on-confidence Rajasthan Royals in match 12 of IPL 2020 at the Dubai International Stadium here on Wednesday. Kolkata overcame a struggling Sunrisers Hyderabad in their previous encounter while Rajasthan go in having chased down the highest ever score in the IPL -- 224 against Kings XI Punjab.

KKR put up a highly methodical effort against SRH to restrict them to 142 in the 20 overs. Pat Cummins made a brilliant comeback after the pasting he took in the first match against Mumbai Indians. Mystery spinner Varun Chakravarthy also made his mark by foxing the dangerous David Warner.

With no pressure, KKR batsmen took the opportunity to enjoy themselves. Shubman Gill played a mature hand remaining unbeaten on 70 while the experienced Eoin Morgan also got his eye in with a fluent 42. They would, however, want Andre Russell to get into the act. Kolkata’s star hitter hasn’t had much to do so far. 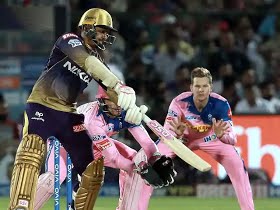 KKR’s opponents Rajasthan would be on an ultimate high after what they achieved against Kings XI Punjab. After looking gone for all money, they made a sensational comeback courtesy Rahul Tewatia, who turned an overnight star with 31 from 53 balls after struggling for most part. The stunning victory could not have been achieved without significant contributions from Sanju Samson and Steve Smith. They would be extremely pleased with their batting exploits so far.

RR though would hope their bowlers come up with a better show against KKR. Everyone from Jofra Archer to Shreyas Gopal struggled in the previous game. It remains to be seen whether RR carry on with Jaydev Unadkat. If they can get their bowling together, RR will have an edge over KKR.

Head to Head Record: Kolkata Knight Riders and Rajasthan Royals have met 21 times. Both sides have won 10 matches each with one game ending as no-result.

The pitch at Dubai is very good for batting. The last game here saw Royal Challengers Bangalore (RCB) winning the game against MI in the Super Over, with both teams scoring 200 plus.

The conditions will be hot with the maximum temperature being 39. Humidity will be around 33 percent.