Hosts West Indies worked their way to 179 for 3 in 79 overs before rain disrupted play at the Kensington Oval in Bridgetown, Barbados on Day 1 of the First Test against Australia.

West Indies batting first after winning the toss got a solid partnership of 104 runs for the 2nd wicket between opener Kraigg Brathwaite (57 from 199 balls with 4 fours) and Kirk Edwards (61 from 107 balls with 10 fours and a six). 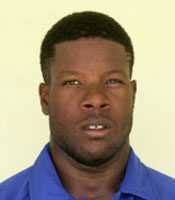 By the close of play, West Indies have Darren Bravo on 20* alongside the experienced Shivnarine Chanderpaul who is on 8*.

The Australians gave Test Debut to Wicket Keeper Matthew Wade in the absence of Brad Haddin.