cricket match turned into a wrestling-kickboxing contest with players fighting on the field with bat being swung and one of the cricketers knocked down to the ground.

Cricket match turned into a wrestling-kickboxing contest with players fighting on the field with the bat being swung and one of the cricketers knocked down to the ground.

Bermuda cricketer Jason Anderson has been slapped with a life ban for inciting a hair-raising brawl during a club match in the small island nation. 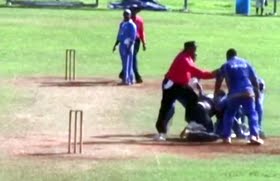 While Anderson was banned for life, O'Brien was barred for a "period sufficient to include 6 Logic 50 over matches".

After this incident, the match was halted and Anderson was sent off the field. Later, the cricket contest resumed and Cleveland won by 72 runs.

Right-handed batsman O'Brien too has played for Bermuda, in 9 ODIs and 3 T20Is. He was also punished with Level 3 breach. He was suspended from 6 50-over matches.

Bermuda Cricket Board (BCB) said, "Jason Anderson formally of Cleveland County Cricket Club has been found guilty of a Level 4 2.4.2 of the Code of Conduct: Physical assault of another Player and has been given a life ban from all cricket and any involvement in the game of cricket in Bermuda in any capacity."