A supremely confident Hyderabad will take on Delhi in match number 16 of the Indian T20 Cricket at Feroz Shah Kotla on Thursday.

A supremely confident Hyderabad will take on Delhi in match number 16 of the Indian T20 Cricket at Feroz Shah Kotla on Thursday. After an early setback, Hyderabad recovered well to win two in a row. Delhi , on the other hand, had a solid start but could not build on their foundation.

Having upset Mumbai , they faltered against Chennai at home only to be rescued in the Super Over by Kagiso Rabada against Kolkata again only to stumble shockingly against Punjab, when they were on the verge on a win. 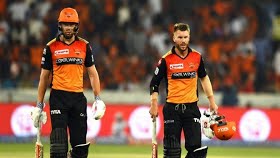 For Delhi, Prithvi Shaw, Rishabh Pant and Shikhar Dhawan have all contributed but their batting has never really come together as a team, evident in the miraculous collapse against Punjab. That will need to change soon. In the bowling as well, they have impressive spinners in Amit Mishra, Axar Patel, and Sandip Lamichhane. Again, as a combination, they haven't produced the goods.

In contrast, Hyderabad have been on an upward curve. After Andre Russell pulled the game away from them in the first contest, they recovered to post an impressive win against Rajasthan before completely blowing away Bangalore...

The form of David Warner has been exceptional and he has found a more than the able partner in Jonny Bairstow. Tons from both were instrumental in the previous game's winner. They have some excellent spin talent in Rashid Khan as well as Mohammad Nabi, who can exploit the Kotla pitch. There is also pacer Bhuvneshwar Kumar, who could be handy under the conditions.