ICC Announced Test and ODI Teams of the Year 2015

Alastair Cook named captain of the Test side while South Africa captaion AB de Villiers lead ODI team of the year. No any players in the list of World No.1 South Africa. 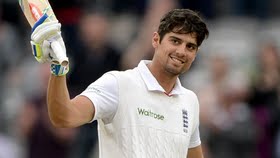 For Cook, this is his fourth selection and his second as captain having achieved that feat in 2013. Ravichandran Ashwin only Indian in Test team as a 12th man. A part of England, three players each from Australia and Pakistan, and two players for New Zealand side. No any players in the list of World No.1 South Africa.

South Africa's AB de Villiers, meanwhile, has been selected in the ODI Team of the Year for the fourth time in five years and for the first time as captain. He is one of three Proteas players selected alongside Hashim Amla and Imran Tahir. A part of South Africa, two players fromSri Lanka, World Champion Australia, and ICC World Cup runner New Zealand. One player each from India, Bangladesh and England.