The twists and turns continued on day four of the Birmingham Test, but by stumps on Saturday, England were firmly in control

The twists and turns continued on day four of the Birmingham Test, but by stumps on Saturday, England were firmly in control. While Pakistan chipped away at the wickets in the first two sessions, hanging in every time it seemed the hosts were inching ahead, the last session clearly belonged to England. Moeen Ali and Jonny Bairstow came together with the score of 282 for 5, and added a brisk 132 in 27 overs, unseparated at the end of day’s play. England finished the day on 414 for 5, with a lead having grown to a healthy 311.

With the pressure growing, Bairstow counter-attacked, and also ran hard between the wickets, in the process catching Pakistan’s bowlers off-guard. Having started slowly, he got to his fifty in 83 balls. The innings also saw Bairstow becoming the highest-scoring wicket-keeper batsman from his country in a calendar year. Moeen on the other hand registered his second half-century in the match. From the Lord’s horror, it has been quite a turnaround for him. He took good advantage of a tiring attack, and was particularly harsh on Yasir Shah, dancing down the pitch to him more than once, displaying proper control. 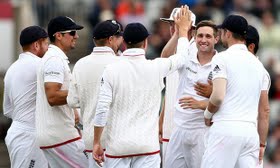 Misbah-ul-Haq did not over-attack, perhaps believing that he couldn’t give away too many. And, Pakistan tested England patience in the first two sessions, giving away only 63 and 79 in the first two sessions, before Bairstow and Moeen blazed away and 152 came in the stroke-filled final session of the day. But, more than giving away runs, Pakistan would be disappointed with the big chance that slipped away in the first session. Joe Root, who again failed to convert a fifty into a hundred, was on 25 when he edged Rahat Ali to Mohammad Hafeez at first slip. Like with the bat, Hafeez failed again.

Root, in the company of James Vince, went on to consolidate the innings, after the early losses of openers Alastair Cook and Alex Hales. Root went on to complete another fifty, from 108 balls, but departed for 62, top-edging a sweep off Yasir. As for Vince, this was a make-or-break knock. England cannot go with him for ever. Aware of the same, Vince made a concerted effort to play straight, and not hang his bat outside the off-stump. The company of the illustrious Root seemed to help his confidence. But, having made a solid 42, he flirted at Mohammad Amir’s first delivery with the second new ball, and edged to slip.

Earlier, Pakistan also sent back Cook and Hales without much trouble. Sohail Khan had Cook driving at a wide delivery, and Yasir dived full length to his left at point to pluck the catch. Hales soon edged Amir to second slip, unable to control his driving urge. This was followed by the Root-Vince stand. After their dismissals, it was up to Gary Ballance to stand up. He got a start, but again fell to his nemesis Yasir, giving catching practice to leg slip. That was the last moment of joy for Pakistan on the day.