According to reports, former India team director Ravi Shastri is among those who have decided to apply for the position of India's head coach

According to reports, former India team director Ravi Shastri is among those who have decided to apply for the position of India's head coach, lying vacant after Anil Kumble stepped down.

“Yes, I have decided to apply for the job,” Shastri confirmed to The Indian Express. Shastri also dismissed reports that he would apply only after he is given an assurance of getting the job.

Shastri, it may be recalled was the director of the Indian cricket team from 2014 and 2016, a period during which India did not have a coach. Under him, India made it to the semi-final of the 2015 World Cup and as well as the T20I World Cup in the same year. 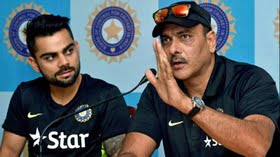 It may be recalled that he had applied for the position last year as well, but Kumble was chosen ahead of him. Shastri, back then, was involved in a verbal duel with Sourav Ganguly over the manner in which the selection process was conducted.

Kumble quit stating that captain Kohli had reservations about his style, and also that his partnership with Kohli was untenable.

According to some reports, Kohli had recommended Shastri to the Cricket Advisory Committee comprising Sourav Ganguly, Sachin Tendulkar and VVS Laxman, for the position of head coach.