We needed one winning performance: Hafeez after Pakistan's shock upset over England

Mohammad Hafeez shone with a sublime 84 and a wicket as Pakistan stunned favorites England by 14 runs at Trent Bridge, despite hundreds from Joe Root and Jos Buttler.

Batting first, Pakistan, who were bowled out for 105 against West Indies, amassed 348 for 8 thanks to contributions throughout the innings. Shadab Khan, Wahab Riaz and Mohammed Amir then lifted the team with wickets at crucial stages even while proving expensive.

The 38-year-old Hafeez, who was declared man of the match, said, "We needed one winning performance and then everyone contributed. It is a very happy dressing room." The victory ended Pakistan's run of 11 losses in ODIs.

Unlike in the last game against Pakistan, this time the openers Imam-ul-Haq and Fakhar Zaman added 82 for the first wicket in quick time. And, apart from Hafeez, skipper Sarfaraz Ahmed himself contributed a crucial half-century to help the team towards a 350-run target. 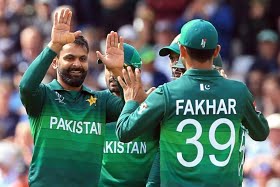 "Everyone was believing we could do this. We were playing good cricket but not winning the crucial stages of the game. Everyone chipped in today and gave everything which was required to win the game. It was a total team effort," Hafeez added on the impressive performance.

"Fielding is a very important part. In the last ODI series, it was different. Today we feel better and we bowl better," he said.

England had to pay the price for poor fielding as the man of the match Hafeez was dropped on 14 by Jason Roy. Skipper Eoin Morgan admitted about the team's performance, "I don't think it was that bad a day. It was just a really bad day in the field. It hasn't happened a lot with us but there were mistakes that we don't normally make. And that's disappointing.

"We've gone from probably one of our best performances in the field at The Oval to, not extremely bad, but it's cost us probably 15-20 runs in the field which is a lot in the one-day game. Our performances with bat and ball throughout the tournament will ebb and flow. Today it wasn't that bad," Morgan added.