The Mumbai Indians (MI) will take on the Chennai Super Kings (CSK) in match number 33 of the Indian Premier League (IPL) 2022 at the DY Patil Stadium in Navi Mumbai. Both MI and CSK are the two most successful teams in the history of the IPL, with a combined nine titles between them. However, this season both have struggled and are languishing at the bottom of the points table. While CSK have won only one of their six matches played so far, MI have been on the losing side in all the six games they have featured in.

In their last match, Mumbai were hammered by the Lucknow Super Giants (LSG) by 18 runs. Bowling first, they conceded 199 runs as KL Rahul hit a superb hundred. In the chase, MI were held to 181 for 9 as no batter could reach even the 40-run mark.

The form of openers Rohit Sharma and Ishan Kishan is a massive worry for Mumbai. They need to start delivering although it may already be too late. Dewald Brevis, Tilak Varma and Suryakumar Yadav have done well in the middle-order while Kieron Pollard has played a couple of breezy cameos. 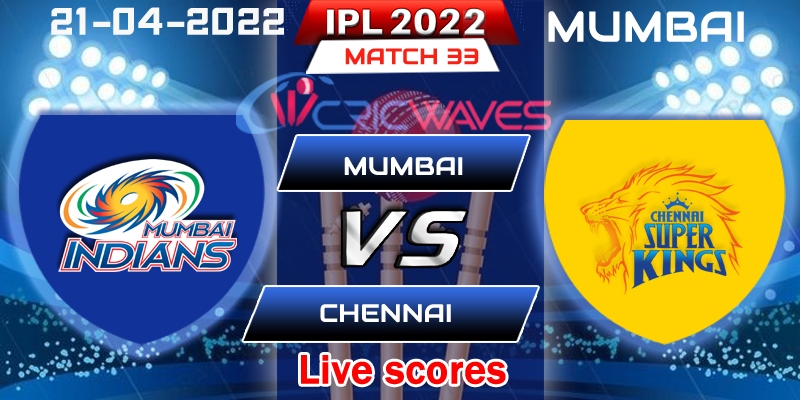 In the bowling, teams are playing Mumbai smartly. They are seeing off the threat of Jasprit Bumrah and attacking the other bowlers. Jaydev Unadkat has found some rhythm while Murugan Ashwin has been economical. Mumbai should give a chance to Riley Meredith instead of Tymal Mills, who is proving to be too expensive.

CSK lost a golden opportunity to beat the Gujarat Titans (GT) in the last match as David Miller and Rashid Khan stunned them in a chase out of nowhere. There was some good news for Chennai in the defeat though as Ruturaj Gaikwad found form. Ambati Rayudu also looked good. Chris Jordan was erratic at the death and might be replaced by Dwaine Pretorius.