England defeated India by 9 runs in the opening ODI at Rajkot. It was a high scoring contest with England setting up India a target of 326 and then winning it by 9 runs.

England defeated India by 9 runs in the opening ODI at Rajkot. It was a high scoring contest with England setting up India a target of 326 and then winning it by 9 runs. James Tredwell took four wickets with his off spin to bowl the visitors to a 1-0 lead in the 5-match series.

India came back with a few tight overs but lost the plot in the end overs with Samit Patel (44* from 20 balls with 6 fours and a six) and Craig Kieswetter (24* from 20 balls with a four and 2 sixes) lifting England to 325. For India, Ravindra Jadeja with 10-0-46-0 and Suresh Raina with 5-0-18-1 could exert some kind of pressure on the English batsmen with their tight bowling. 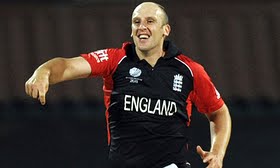 India’s innings was on similar fashion to that of England’s with the openers putting up a solid stand. Ajinkya Rahane scored 47 (from 57 balls with 6 fours) in an opening stand of 96 in 16.4 overs before he got out chipping Tredwell to long off. Gautam Gambhir scored a run-a-ball 52 before he was caught at mid wicket off the same bowler. Virat Kohli had yet another failure in recent times, caught behind trying to play a forcing drive on the up off Bresnan.

The hosts at 138 for 4 were boosted by Yuvraj Singh who scored 61 from 54 balls (with 8 fours and a six) but got out at the wrong time sweeping Tredwell into the hands of short fine leg. Suresh Raina kept the fight going and helped himself to a busy 50 from 49 balls (with 7 fours) before he was caught and bowled by Tredwell in the 42nd over. A lot was left on MS Dhoni and he revived India’s chances with four big sixes but could only settle with a cameo of 32 from 25 balls with his lofted shot off a slower one from Dernbach ending in the hands of long off in the 45th over. Dernbach sealed the match by removing Ravindra Jadeja in the same over leaving India at 273 for 7.

There was some false hope in the form of R Ashwin and Bhuvaneshwar Kumar but in the end, the equation was just too much for their abilities. India ended up at 316 for 9 with James Tredwell curtailing them with match winning figures of 10-0-44-4. The surprise package was Joe Root who gave away very few runs in a first spell with his part time off breaks. As expected, Tredwell got the Man of the Match ahead of the batsmen.

Toss and Teams: England have won the toss and elected to bat first in the opening ODI at the brand new Saurashtra Cricket Association Stadium in Rajkot. India surprisingly have left out Shami Ahmed and replaced him with Ashok Dinda. Middle order batsman Joe Root makes his ODI Debut for England.