IPL 2016: Mustafizur Rahman was brilliant for Sunrisers against Kings

Sunrisers Hyderabad put up yet another shining effort against the struggling Kings XI Punjab to carry on their winning run in IPL 2016. There has been a trend to the tournament this season, which has been rather predictable. The match between Hyderabad and Punjab at Uppal in Hyderabad on Saturday was the 15th one won the team batting second. Having said that, credit must go to Sunrisers for the manner in which they held Kings XI Punjab to a low score bowling first, and then chased down another target with ease, thanks to their openers. There was a lull in the middle, but they had enough back up.

Yet again, it was Sunrisers’ bowlers who won the match for them. And, once more, Mustafizur Rahman was the standout bowler. He mixed up his slower balls, off cutters and slow yorkers superbly to keep the opposition under check. Rahman’s match-defining effort yet again proved that bowlers can succeed even in T20 if they are smart enough. Not only did Rahman manage to send down a maiden over, the only of the match, he also claimed the scalps of Shaun Marsh and Nikhil Naik, in what was a performance totally worthy of the match of the match award. 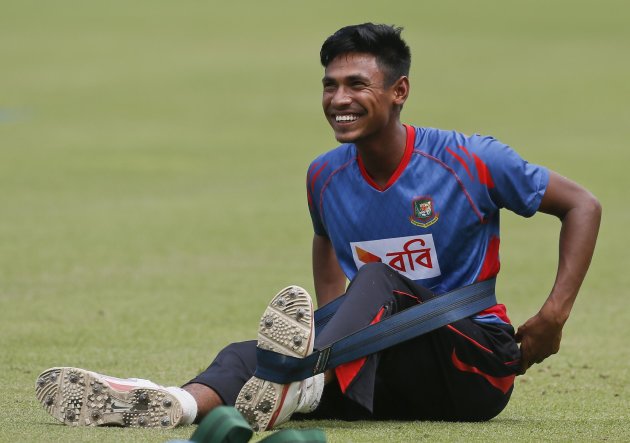 It was a familiar story for Kings XI Punjab as their batsmen failed to stand up and deliver yet again. Skipper David Miller experienced yet another failure as he fell for a single-figure score. Ditto with Glenn Maxwell. The two combined to contribute only 10 runs to the total, and that was a massive let-down for Punjab. The failure of Miller and Maxwell has been the story of the season for Punjab, and unless that changes they will continue to struggle. The same has been the case with Murali Vijay, who has failed to give the team the desired starts.

Another reason behind Punjab’s poor show has been that their batsmen who have got starts haven’t carried on. Manan Vohra reached the 20s, before once again giving it away. Shaun Marsh hung around for 40, but it wasn’t a fluent innings by any stretch of the imagination. He was dismissed in the 14th over, when the team was hoping for him to carry on. When Marsh was dismissed, Punjab were in big trouble at 89 for 5. They recovered thanks to a good counter-attack by Axar Patel, but it only gave Punjab an outside chance of defending a decent total.

Sunrisers knew they only had to get a good start to put themselves in a strong position to win. David Warner, once more, got the team off to a rollicking start. The Aussie left-hander has been in smashing form this season, and the only worry for his team will be the fear that their captain has possibly peaked too early. Sunrisers would be happy to see that Shikhar Dhawan continued his run-making form against Punjab as well, although they would like him to score quicker. A few wickets were lost cheaply, but Eoin Morgan ensured the team got through without a lot of trouble.