Sehwag posts special messages for Dada on his 45th birthday

Sourav Ganguly turned 45 on Saturday, and one of his biggest admirers, Virender Sehwag posted some special tweets for his former skipper.

Sourav Ganguly turned 45 on Saturday, and one of his biggest admirers, Virender Sehwag posted some special tweets for his former skipper.

Sharing a picture of Ganguly and himself during a Test match from their playing days on Twitter and captioned it: "Whatever success I could achieve in Test Cricket,I truly attribute it to the wonderful support you gave me @SGanguly99 . #HappyBirthdayDada."

In another tweet, Sehwag posted a photo of Tendulkar, Ganguly and himself in Team India’s ODI colours. "May you keep on helping India wave our flag high, just like u waved ur shirt at Lords (sic)," Sehwag’s caption said. 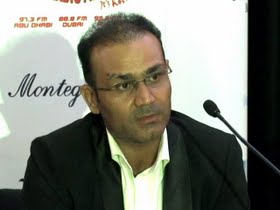 Sehwag also put up a newer picture with himself and Ganguly, now as commentators. In this caption he wrote, "Pro Tip-While with Dada,best to be on his leg side.On the offside,ball or human it's a boundary. In this pic,Bat is on his left. #OffSideGod.”

Sehwag debuted in Tests in South Africa during Ganguly's captainship and made 105. He went on to play 104 Tests, scored 8586 runs at an average of just under 50 with two triple hundreds.