Cheteshwar Pujara admits he has been working harder on his fitness

Indian captain Virat Kohli notched up his fifth Test double ton against Sri Lanka on the third day's play of the second Test at Nagpur. Kohli made 213 off 267 ball

Indian captain Virat Kohli notched up his fifth Test double ton against Sri Lanka on the third day's play of the second Test at Nagpur. Kohli made 213 off 267 balls at a strike rate of 79.77.

Cheteshwar Pujara was asked why other players cannot score at his pace. "See, he is a kind of player who performs well in all the formats of the game and the way he started off, if there was some other batsmen, I don't think they could have started in the same way. I think it's his confidence and way he is batting, in last two to three years, it would have been difficult for any other batsman to score at such a strike rate," Pujara was quoted as saying in a NDTV report. 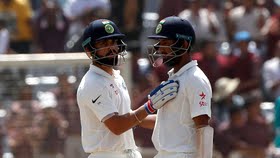 On the Nagpur wicket, India’s No.3 added, "Kolkata was different wicket altogether with a lot of assistance for fast bowlers especially in the first innings. Coming to this particular wicket, I think, it was difficult to score runs as this wicket was on the slower side. It was not easy to get boundaries and we had to rotate the strike.”

"Whenever we got some opportunities, we tried playing some shots. But overall, it was a tough pitch, where you might not get out but it was also difficult to score runs," Pujara went on to add.

Pujara admitted he himself has been working harder on his fitness in recent times. "I think for the last one and a half to two years, I have been working hard on my fitness and luckily there has not been any sort of injury. I am fully fit and that's the reason I am able to take quick singles and doubles. Even my recoveries are much better now when it comes to fitness," said Pujara.