WI vs Aus 2nd ODI: Oz spinners were too good for West Indies

West Indies went into the second one-dayer of the tri-series against Australia with a definite degree of confidence having beaten South Africa in the first match.

West Indies went into the second one-dayer of the tri-series against Australia with a definite degree of confidence having beaten South Africa in the first match. But, they were always going to find the going tough against the Aussies, which is exactly how things turned out to be. Australia were too good for West Indies on the day. The hosts' batting is definitely their weak link, and the same was exposed by the Australian bowlers on the day on a responsive pitch. Batting first, West Indies needed to put up a big score on the board. And, once they failed to do the same, Australia always had their noses in front, and they batted with resolve to earn the bonus point. 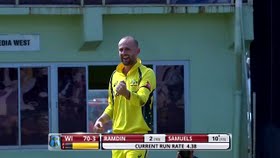 In the preview to the match, it was mentioned that Australia could play both their spinners. They did the same, and the move worked wonders. Both Adam Zampa and Nathan Lyon bowled excellently to keep West Indies under the pump, never allowing the hosts to get into any sort of rhythm. Although the surface was a tough one to bat on, West Indies should still have done better than the 116 they ended up with. Not a single West Indian batsman managed to reach even 30, which was a massive disappointment. In the match against South Africa, Kieron Pollard rescued them, but this time there was no such knock.

The match marked the return of left-arm pacer Mitchell Starc, and the Aussies would have anxious to see how he would perform on coming back from injury. From what was on display, they would have been pleased. Starc did not display too much signs of nervousness on return. In fact, he was right on the money, sending back both the openers Andre Fletcher and Johnson Charles. After Starc did the early job, the spinners took over. Lyon was instrumental in the win, sending back the two big names in the West Indies batting line up -- Marlon Samuels and Kieron Pollard, Windies' batting hero in the last match.

What stood out about Australia in the match was the overall bowling effort which constantly maintained pressure on the Windies batting line-up. Lyon was wonderfully aided by Zampa, who dismissed Carlos Braithwaite and opposition skipper Jason Holder, both dangerous batsmen in their own right. Mitchell Marsh chipped in by sending back Darren Bravo while Glenn Maxwell picked the wicket of Denesh Ramdin. West Indies never really got into any sort of rhythm, or rather Australia did not allow them to get into any. It was the kind of performance which reiterated West Indies have a long way to go despite defeating South Africa.

If they want to do well in the series, West Indies will need their experienced batsmen to stand up. Samuels is definitely one man who will need to take additional responsibility in the coming matches. He has failed in both games so far, and that has hurt the team. Bravo and the openers too need to stand up and support the likes of Samuels and Pollard. On a tough surface, Aussie opener David Warner proved what a quality batsman he is. His half-century was by far the best innings on the day. Just two matches into the series, it is clear Australia are the team to beat in the tournament.