August 22 marks exactly two years since England thrashed India 4-0 in the much-hyped Test series for the battle of the top spot in the five-day game.

August 22 marks exactly two years since England thrashed India 4-0 in the much-hyped Test series for the battle of the top spot in the five-day game. The series was a no-brainer since only one team turned up, and India had left back their best while packing their bags for England. August 22, 2011 was the last day of the series, played at the Kennington Oval in London. Having lost the first three Tests comprehensively, India were looking to save face on the last day, following on. There was some hope when Amit Mishra and Sachin Tendulkar batted out for a long period making respective half-centuries, but after their respective dismissals India collapsed and lost the Test by an innings and 8 runs. 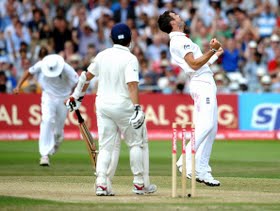 The 4-0 whitewash was a big eye opener for India. They had headed to England with plenty of hopes on the back of a match-winning streak. But, the reality was that most of those wins were secured at the comfort of their home or the subcontinent, and even the triumphs abroad were against weaker sides. The series in England was the first big Test for India away from home, and they flunked badly. Not only did they lose their number one standing, but also ended up embarrassing the supporters of the team, who had real big hopes.

There were plenty of lessons for India from the English disaster. The opening pair of Gautam Gambhir and Virender Sehwag struggled in each and every Test, but the Indians refused to make any changes. The senior batsmen barring Rahul Dravid were also found out. VVS Laxman and Sachin Tendulkar both were woefully short of runs, their dwindling skills and lack of footwork getting exposed with every passing Test. Yet, India preferred to go in with the old tried and tested formula in every game, which failed miserably.

Had India learnt their lessons from the English disaster, they would have taken some proactive steps leading into the Australian series. Instead, the selectors preferred to ignore the major problem, and sent the same side Down Under. The result was another disaster. Everyone from Gambhir to Sehwag and Tendulkar to Laxman had another forgettable series, and with skipper MS Dhoni also failing to come up with anything inspirational, India were beaten black and blue, 4-0 in other words, for the second series in a row.

Some harsh realities had to be grappled with again. That said, there was enough evidence of the disaster awaiting the side in Australia in the defeat in England itself. The job was made easy for the Indian selectors with Dravid and Laxman announcing their retirements within a few days of each other following the Aussie bashing. In times to come, Gambhir and Sehwag were also dropped and India have discovered a massive talent in Shikhar Dhawan as an opener. Two years since that day in Kennington Oval, India have definitely moved forward in the right direction. Then again, they would be tested to the core once again in South Africa.