India are well placed at 100 for 2 after bowling out the Kiwis for 192. Shikhar Dhawan has set up India nicely with an unbeaten knock of 71 from 87 balls with 10 fours and a six.

India are well placed at 100 for 2 after bowling out the Kiwis for 192. Shikhar Dhawan has set up India nicely with an unbeaten knock of 71 from 87 balls with 10 fours and a six.

New Zealand could take only two wickets on a pitch that was quite helpful to the seamers. Murali Vijay got out in the 2nd over itself, with an inducker from wide outside off jagging back with bounce to take the glove on its way to the keeper. After the early loss, India were nicely steadied by Shikhar Dhawan and Cheteshwar Pujara to see off the new ball threat.

In the 25th over, Trent Boult got one to swing back and skid through to hit the backpad of Pujara (19) to have him lbw. Pujara helped Dhawan to add 87 runs for the second wicket. By stumps, Dhawan was joined by night watchman Ishant Sharma (3*). India need to score 92 more runs before getting into the lead. 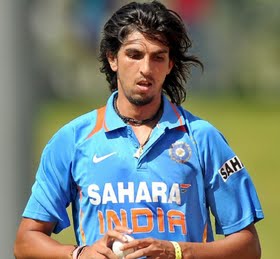 Update of NZ innings: Ishant Sharma took six wickets and Mohammad Shami took four as India bowled out New Zealand for a modest total of 192 in the Second Test at Wellington.

On a green pitch at the Basin Reserve, India won the crucial toss and asked the Kiwis to bat first. Ishant provided the first breakthrough in the 10th over with a short ball that Hamish Rutherford could only glove it to the slip cordon. With a skiddy indipper, Ishant struck again trapping the other opener Peter Fulton lbw. Debutant Tom Latham was out for a duck nicking an away going seamer from Ishant to leave the Kiwis at 26 for 3.

Mohammed Shami gave the biggest breakthrough for his team when NZ Skipper Brendon McCullum drove uppishly to give a simple catch to mid off. India closed the first session with the Kiwis at 51 for 4.

After lunch, India survived a counter-attack from Corey J Anderson and got him caught in the slips off Ishant for 24. Ishant struck quickly again removing BJ Watling caught in the slips for a duck to a bouncy away going delivery which left the Kiwis at 86 for 6.

India were defied by the 7th wicket stand between Kane Williamson and debutant James Neesham. Williamson ran out of luck after a couple of escapes to nick Shami to the diving Rohit Sharma in the slips. The Kiwi no.3 scored 47 from 100 balls with 6 fours.

New Zealand finished with a decent score with Neesham scoring 33 and Tim Southee hitting three sixes in his 32. The hosts were bowled out in just 52.5 overs just after the tea break.