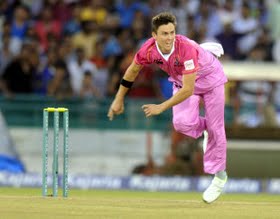 1.Cobras are one of the 14 teams to make 1000+ runs in the Champions League. In all, 38 teams have taken part in this tournament.

2.Among teams that have made 1000+ runs in the tournament, Cobras and Victoria are the only ones to not have a single 100-run partnership.

3.Knights' Daniel Harris is one of only five batsmen to score a Champions League century.