Captain’s inning of Virat Kohli and little cameo at start of the inning from Chris Gayle helped Royal Challengers Bangalore to chase a stiff target of 81 runs in six over with one ball to go in a rain affected encounter against Sunrisers Hyderabad in Chinnaswamy Stadium, Bangalore. 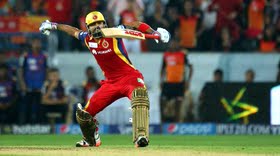 Due to heavy rain, the start of the match was delayed and it was curtailed to 11 over for each side. Opting to bat first, Sunrisers Hyderabad scored 135 runs at loss of three wickets in their quota of 11 overs. David Warner and Moises Henriques scored a blitzing half century to set a massive target. Warner and Henriques added 103 runs for the second ball off just 43-balls. Henriques reached his fifty in 20 balls with five boundaries and four sixes. Warner was unbeaten on 52 off just 32 balls where he blaster five fours and six.

The rain had come in the 10th over of the SRH inning but the umpires were happy to continue with the game and finished the inning. With rain and wet outfield delaying the game, RCB were given a reduced target of 81 runs in six overs.

In reply, Chris Gayle and Virat Kohli came all guns blazing. The opening pair accumulated 17 runs off Dale Steyn in first over and 23 runs off Bhuvneshwar Kumar in second over. This turned the game in RCB favour as the equation now was 41 needed off four over with all ten wickets in hand. This was never a tuff task for RCB but what happened in the third over bended the backbone of RCB. Henriques took two wickets of Chris Gayle and AB de Villiers on consecutive deliveries. This again turned the game in SRH’s favour. RCB lost two more wickets but Kohli kept finding boundaries which helped in keeping required run rate in control. With 24 runs needed off the last two overs, Praveen Kumar conceded only 10 runs. Bhuvneshwar Kumar came for the last over but he had no clue against the class of Virat. Virat dispatched his two good deliveries for boundaries before Warner took the catch and touched the rope behind in celebration. 19-balls 44 runs inning of Kohli was laced with three fours and same number of sixes.

With this win, Royal Challengers Bangalore jumped on the second spot of the points table. Sunrisers Hyderabad will have to win their next game to qualify for the playoffs. After 52 games of IPL this season, only Chennai Super Kings have assured their playoffs berth.

Man of the Match: Virat Kohli