Under Ganguly, India won the Natwest Trophy in 2002 in England, and were runners-up in the 2003 World Cup final as well as the 2000 ICC Champions Trophy. They also famously drew the 2003-04 Test series Down Under.

On the occasion of Ganguly's 48th birthday, many current and former cricketers chipped in with heartfelt wishes. Take a look below. 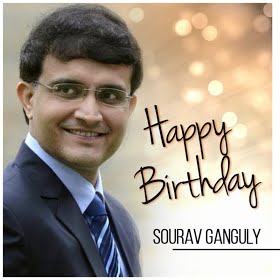 "Happy Birthday to the undisputed Dada of Indian Cricket. You have always led from the front, showing us what it means to be a true leader. I have learnt a lot from you & hope to become to others what you are to me. You are our eternal captain," Yuvraj Singh said.

VVS Laxman, who was an integral part of India's Test team under Ganguly, wished greater success to 'Dada'. "Many more happy returns of the day @SGanguly99. May you taste ever more success and receive more and more love. Have a great day and year ahead."

Current India opener Shikhar Dhawan said, "You’ve taken Indian cricket to new levels!" while lanky India pacer Ishant Sharma termed Ganguly an inspiration. "A true inspiration for many! Lots of love and best wishes to you! Have a great #QuarantineBirthday!" he said.