West Indies looking to make it five Test wins in a row: West Indies beat New Zealand by nine wickets at the Vivian Richards Cricket Ground in Antigua last July and a week later won by five wickets at Sabina Park in Jamaica. Last November, they beat Bangladesh by 77 runs in Dhaka and then had an easy 10-wicket victory in Khulna. 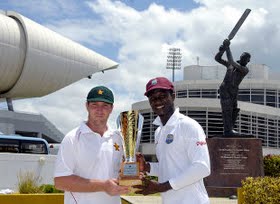 Since the start of the England tour last year, Marlon Samuels has scored 866 runs in seven Tests at an average of 86.60.

West Indies didn't lose a single Test at the Kensington Oval between 1935 and 1994.

There have only been six Tests so far between the two sides, with West Indies winning four and the other two being drawn.

Chris Gayle, Shivnarine Chanderpaul and Heath Streak are the only three players to have played in all six Tests between the two sides.

With 23 wickets, Ray Price is the most successful bowler in Tests between West Indies and Zimbabwe.